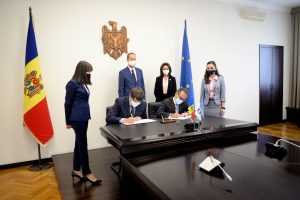 The funding will be provided for the rehabilitation of Tighina-Căușeni-Basarabeasca-Etulia-Giurgiulești mainline, the most congested rail of the country, which at the same time is the most important railway connection for freight transit between Romania and Ukraine.

“The EBRD is a strong supporter of Moldova, and we remain fully committed to the country’s economic development. Implementing the administration’s ambitious agenda will send a strong signal to the private sector and help unlock jobs-generating investment by local and foreign investors alike. We stand ready to support the business environment with investment, advice and technical assistance,” Prime Minister Natalia Gavriliţa said during the meeting with the EBRD representatives

In 2019, Calea Ferată din Moldova also received from the European Investment Bank a EUR 30 million loan for the modernisation of its rail infrastructure, particularly the modernisation of Bender-Căuşeni-Basarabeasca-Etulia-Giurgiuleşti railway line which is estimated at a total investment of EUR 102 million. This project is also supported by the EBRD through the EU Neighborhood Investment Platform.

In 2022 CFM’s rail development programme is estimated a EUR 300 million and by 2024, the plan includes a EUR 306 million needed investment.

The rail modernisation projects will allow trains to run at increased speeds, and along some sections, they will be able to travel at speeds of up to 100 km/h.

Calea Ferată din Moldova is focusing both on infrastructure rehabilitation as well as on rolling stock renewal. In 2020, the company has received the first six ТE33А diesel locomotives manufactured in Kazakhstan. The contract signed in 2018 with GE Transportation, division of Wabtec, covers the delivery of 12 diesel locomotives.