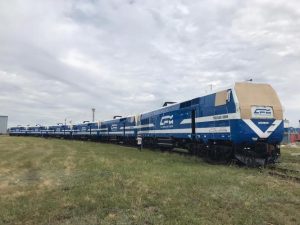 The first batch of six of twelve GE locomotives for CFM have arrived in Chisinau, the capital of Republic of Moldova, on July 14, 2020.

“All GE locomotives have successfully completed the testing and certification processes and the first of them have arrived in Moldova. I’m sure that the Calea Ferata din Moldova [CFM] will optimise its operation costs and will increase the attraction of rail passenger and freight transport services by the deployment of these new locomotives as well as by the modernisation of the railway infrastructure,” the President of Moldova, Igor Dodon, said.

The new locomotives are manufactured in Nur-Sultan, Kazakhstan, by GE Transportation, now a division of Wabtec. The US company and CFM signed in November 2018 a EUR 45 million contract for the supply of 12 ТE33А diesel locomotives.

The GE locomotives for CFM will consume less energy that the current fleet and ensure safer and more efficient rail transport services. Due to the “technical characteristics of the new locomotives, will increase the interval between the scheduled maintenance to 92 days from 48 hours, significantly reducing the maintenance costs,” CFM Director General explained.

The locomotives will reduce diesel fuel consumption by 15-20% and oil by 35-40%, resulting in significant savings while reducing the impact on the environment.

The locomotive acquisition is funded by the European Bank for Reconstruction and Development, the European Investment Bank and the European Union and is part of a large project that also includes the rehabilitation of railway infrastructure and the implementation of a comprehensive reform of CFM to improve safety, efficiency and corporate governance. 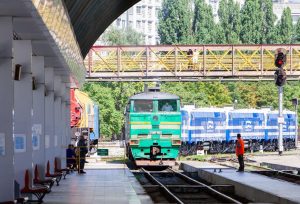 he arrival of the new locomotives, financed by the EBRD, EIB and EU, is a real milestone: they mean a more modern, greener and dynamic Moldova. The new rolling stock will facilitate Moldova’s trade, keep the economy’s wheels turning and improve lives,” Angela Sax, EBRD Head of Moldova, said in a video statement.

The tender for the upgrade of railway infrastructure is currently underway and the company is implementing an action plan to improve corporate governance. In addition, Moldova’s parliament is due to adopt a new Railway Code, legislation based on EU directives that aims to bring the country’s railway sector in line with the Association Agreement with the EU.

The total value of the project is EUR 110 million, of which EUR 5 million is an investment grant from the Neighbourhood Investment Facility (NIF) and the remainder from loans by the EBRD and EIB.

In 2019, the EIB provided a EUR 30 million loan for the modernisation of a 233 km line between Bender and Giurgiulesti, at the border with Romania, which is part of Moldovan South railways corridor. EUR 102 million is the total value of the project, which is also funded by the EU and EBRD.