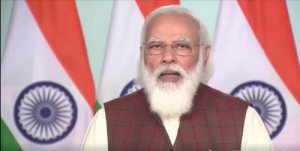 The Union Minister, Piyush Goyal and the Chief Minister of Uttar Pradesh Yogi Adityanath were participated at the ceremony.

The 351 km – long New Khurja – New Bhaupur line is the first fully operational rail section on the EDFC and is served by six new stations. The line covers a total of 249 bridges consisting of 17 major, 137 minor, 92 rail bridges and 3 rail fly overs. The train trials started from September 2019 with 1200 train trials being performed until June 2020.

During his speech, Narendra Modi said that India is “seeing the largest and modern rail infrastructure project being implemented after independence. (…) When the first goods train ran on the freight corridor route of Khurja-Bhau, one could clearly hear the roar of the new India and Atmanirbhar Bharat [the PM vision of making India a self-reliant nation].”

The new rail section will provide additional transport capacity and will relieve the traffic on the existing Kanpur-Delhi line, offering faster and reliable rail transport services.

The Prayagraj control centre will act as the command centre for the entire Eastern Dedicated Freight Corridor. “The Operation Control Centre at Prayagraj also marks the new potential of new India. It is one of the finest and modern control centres in the world,” Narendra Modi said. The EDFC is mconsisting of 1,856 km of rail system split into two main segments. The first one between Dankuni in West Bengal and Khurja in Uttar Pradesh is a 1,409 km electrified double-track line and a 447 km electrified single-track between Ludhiana (Dhandarikalan), Khurja and Dadri in the state of Punjab, Haryana and Uttar Pradesh. 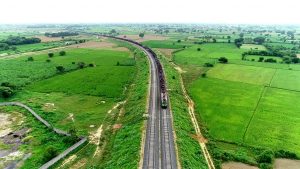 The entire EDFC is projected to cater to a number of traffic streams-coal for the power plants in the northern region of Uttar Pradesh, Delhi, Haryana, Punjab and parts of Rajasthan from the Eastern coal fields, finished steel, food grains, cement, fertilizers, limestone from Rajasthan to steel plants in the east and general goods.

India is also performing the construction for the Western Dedicated Freight Corridor which will have a total length of 1,504 km of electrified double-track from Jawaharlal Nehru Port to Dadri via Vadodara-Ahmedabad-Palanpur-Phulera-Rewari rail route, which will join the Eastern Corridor at Dadri, in Uttar Pradesh.

The dedicated freight corridors are designed to support 1.5 km-long trains running at a speed of 100 km/h with a 22.5-tonne axle load.