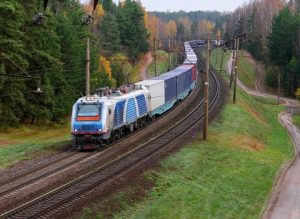 Over 10,000 trains and 927,000 containers were forwarded via the China-EU-China route in 2020, China Railways has announced. The current volume of traffic has grown by 98.3% year-to-year, covering 21 countries and 92 cities in Europe.

UTLC ERA, one of the main transport operators on this corridor forwarded over 600 container trains in October, while over the past six months, average monthly number of shipments on services exceeded 500 units of train formations. A two-fold increase in the volume of supplies was first noticed in April, when the volume of the traffic amounted to 41.2 thousand TEU. In April, Russian Railways, UTLC ERA and DB Cargo have launched an intermodal transit service trial from China to Europe through Kaliningrad Port.

“Since the beginning of the year, we have already transported 430 thousand TEU. By the end of this year, we want to reach an important mark of 500 thousand TEU. This is a difficult, but achievable goal,” Alexey Grom, the Director General of UTLC ERA said.

The company provides services on a wide-gauge track of 1520 mm and acts as the operator of the trans-Eurasian corridor on the China-EU-China route, passing through the territory of Russia, Belarus and Kazakhstan. The average transit time for the basic route connecting China and Europe is less than 5 days.

The operator says that the most demanded product categories on the China-Europe route comprises plastics, textile products, optics and medical equipment, rubbers, perfumery, and cosmetics. In the opposite direction, in return, wood and wood products, fruits and vegetables and other food products, as well as medical supplies are popular.

The stable growth of trade on the railway between China and the EU is due to the increase in applications for the dispatch of cargo by container trains from Europe contrasted with the rise in the cost of air freight.