The total delivery time is estimated at 14 days compared to 45 days to ship by sea. 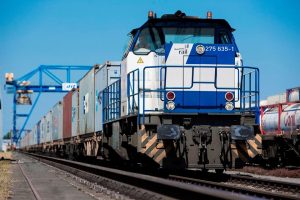 The intermodal route starts in Xi’an, through Kaliningrad, reaching to Germany, in Rostock and Duisburg.
The test train left Xi’an on March 25 and, after traveling the UTLC ERA rail route, arrived at the Kaliningrad marshalling yard on April 5.

It consists of forty-nine 40-foot containers with consumer goods. After being reloaded in the Kaliningrad Port, the train was sent by sea to the port of Rostock on the same day.

The total delivery time on the new multimodal route is estimated at 14 days, compared to 45 days to ship by sea.

In April of this year, it is planned to send five trains from China to Europe and five trains in the opposite direction as part of this project.

The Xi’an-Duisburg route through the port in Kaliningrad is expected to become a permanent shipping artery.