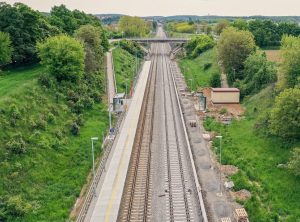 During the Working Group of the Ústí nad Labem Region, Správa železnic has presented a new proposal for the management of Czech high-speed railway plan under the Prague – Dresden connection.

The proposal was unveiled in an effort to identify the final route as there are currently considered three options for the high-speed line. Two of the variants were designed and analysed in a feasibility study previously approved by the Central Commission of the Ministry of Transport. The route responds to the limits in the area, which were discussed with the participants of the working group.

Even the newly proposed route currently does not benefit a comprehensive analysis on the impact on the Ústí nad Labem region, it is already proved that the so-called ‘Holý vrch’ variant is feasible. It runs on the border of the villages of Židovice and Hrobce, then crosses the Elbe Valley and bypasses the village of Chodouny from the southeast so that it is more distant from the inhabited areas.

Based on the agreement within the Working Group, an update of the Principles of Territorial Development (ZÚR) of the Ústí nad Labem Region will be requested soon. In this legal process, all three options will be comprehensively assessed, and local governments, the public and other relevant bodies will be able to comment on them.

Based on the result of the ZÚR update, a variant will be selected, which will be possible to place in the territory regarding its limits.

All three proposals of the high-speed rail management meet the requirements of the project from the point of view of economy, meaningfulness, and sustainability.

The Czech high-speed railway strategy, which includes the Prague-Dresden, is currently in a pre-investment and comprehensive analysis phase and it is expected that the construction for the first section will start in 2025. Recently, the rail infrastructure manager has selected the designer for the most important tunnel of the Prague – Dresden high-speed rail line.