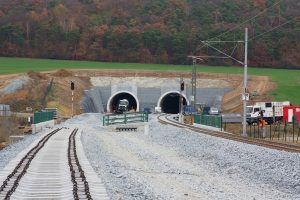 The Czech rail infrastructure manager SZ and DB Netz selected the contractor for the design of the Ore Mountains Tunnel (Krušnohorský tunnel) on the Prague – Dresden high-speed rail connection.

The contract was won by a joint venture comprising the ILF Consulting Engineers Austria, which will prepare the documentation for the zoning decision for the Krušnohorský tunnel connecting Heidenau and Ústí nad Labem.

The contractor will soon start the work on documentation for the new tunnel which is expected to be completed in 2024.

The Krušnohorský cross border tunnel will have a length of at least 26 km of which 11.7 km in the Czech territory and more than 14 km in Germany. It is the dominant civil structure on this new railway section and will be designed as twin tube tunnel according to international rescue and safety regulations. The tunnel will pass through sensitive geological and hydrogeological zones and will possess rescue connections every 500 metres.

In March, the two rail infrastructure managers signed a contract with a consortium for planning expert activities during the construction works for the tunnel.

The Ore Mountains Tunnel is part of the new high-speed line Dresden – Prague which will allow fast rail freight and passenger transport services through the Elbe Valley. In addition to passenger trains, it is estimated that up to 150 freight trains will run daily along the new route, helping to reduce the noise level and impact on the environment.  At the same time, the opening of the new tunnel will significantly shorten the travel time from Ústí nad Labem to Dresden.On this route, the express trains will carry passengers in less than half an hour.

In January, the Czech Ministry of Transport approved the feasibility study of the line, with the first section connecting Prague and Litoměřice dedicated to passenger transport services. it will allow trains to run with a maximum speed of up to 320 km/h. The section across the České středohoří (Central Bohemian Uplands) and further to Germany will also be used by freight trains, thanks to which traffic in the narrow Labe (Elbe) Valley will be relieved. The tunnel under the Central Bohemian Uplands (Středohorský tunnel) will be crossed by trains running at a speed of 250 km/h, while the Krušnohorský (Ore Mountains) tunnel will allow trains to operate with a maximum speed of 200 km/h.