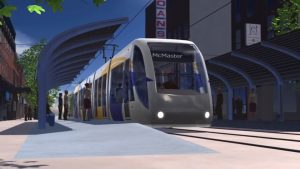 The Government of Canada provided a federal funding of CAD 1.7 billion (USD 1.4 billion) to advance Hamilton Light Rail Transit (LRT) project. The Ontario’s government has also delivered a same value financing bringing the total investment for the project at CAD 3.4 billion (USD 2.8 billion) to support the construction of the new LRT.

Initially, the Government of Ontario made a CAD 1 billion (USD 826 million) commitment for the project, but the financing has been increased to speed up the implementation of the project. In November 2020, a technical review indicated that a USD 1 billion LRT system funded solely with provincial capital would not be of sufficient length to be a viable project to benefit the people of Hamilton and required federal funding to create a feasible project.

The Hamilton Light Rail Transit project covers the construction of 14 km of double line from McMaster University in the west, through downtown Hamilton to Eastgate in Stoney Creek. New, modern light rail vehicles on tracks separated from regular traffic will move more people more efficiently, which means improved wait times and comfort. The line will be served by 17 stops constructed at a distance of 600 – 800 metres and will provide connection to the Hamilton GO Centre through a pedestrian link via Hughson Street.

The LRT will provide passengers a 32-minute travel time, with a train frequency of 6 minutes during peak hours.

At the end of 2019, the Ontario’s authorities cancelled the procurement process due to high increased costs, estimated at CAD 5.5 billion (USD 4.54 in current prices). Three consortia have been shortlisted to design, build, finance, operate and maintain the Hamilton LRT system.

Currently, the Hamilton city councillors are analysing the project and soon they will decide whether to take the first step toward a new deal for the LRT project. A final decision is expected for June 16, after the negotiations of a new memorandum of understanding.