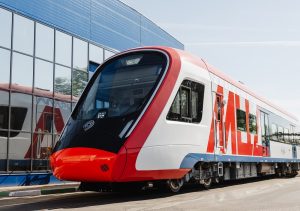 Tver Carriage Works (TVZ), part of Transmashholding, has successfully completed the work on the  acceptance procedure evaluated by a committee giving green light for the manufacture of EGE2Tv Ivolga 3.0 electric train, the newest Russian DC EMUs. The mockup of Ivolga 3.0 EMU has been unveiled in Moscow in 2021.

Based on the results of the commission’s work, an agreement was signed confirming the compliance of the train with the terms of reference allowing to produce an initial batch of trains comprising 35 7-car trains.

The acceptance committee mainly consisted of the representatives of research institutes of railway transport, railway hygiene, the Tver Institute of Carriage Building, the developer company TMH Engineering, Transmashholding, Rospotrebnadzor – the Federal Service for the Oversight of Consumer Protection and Welfare.

The Ivolga 3.0 electric train was created by Russian designers and it is based on domestic components. For the first time in the practice of TMH, an asynchronous traction drive of company’s own design was used in the design of an electric train. The EGE2Tv is the first electric train with a design speed of 160 km/h, which is completely designed and manufactured in Russia.

The train can be adapted to different versions from 4 to 12 railcars, depending on the requirements and traffic demand, and also is able to operate on a system of many units which allows for efficient operation of the train on routes with passenger traffic of different intensity.

The technical solutions used in the design of the electric train ensure a smooth running of the train and a low noise level. The acceleration system allows rapid acceleration and deceleration which can reduce the time it takes to complete the route.

With wider doors of 1,400 mm, the new train facilitate passenger ingress and egress allowing an increase of 15% of passenger flow, compared to the analogues on the Russian market.

Compared to Oriole EMUs of previous modifications, which are running on Moscow Central Diameters (MCD) network, the new Ivolga 3.0 electric train provides has a passenger seat design which is equipped with USB type-A and type-C chargers and provides and folding armrests for each passenger. Hooks for personal belongings are placed under the table and on the vertical handrails. In the head car, it is possible to install a station for recharging electric scooters and a place for bicycles.