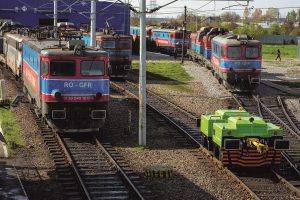 GRAMPET Group – Grup Feroviar Roman (GFR), the largest private rail freight and logistics operator in Romania and Central and South Eastern Europe, announced that the financial estimations show that most of the losses caused by the pandemic in the first part of the year have been recovered.

The operator said that although 2020 came with unique economic challenges, company’s structure of integrated services and strategic infrastructure developed at regional level has favoured a rapid recovery in the second half of the year.

“For us, 2020 was a test year confirming what we have built over the last 20 years – a multinational company with a strategic infrastructure for the entire economy. We are getting more and more signals that the GRAMPET Group is attracting the attention of large investors and interest groups in the global industry, at a time when the market is aligning with the new economic paradigm and the consolidation trend in the transport industries is accelerating,” Gruia Stoica, the President of the GRAMPET Group said.

For the group, 2020 was marked notable performances. In April, Grup Feroviar Roman has received the first Single Safety Certificate from ERA allowing it to operate in Romania and Greece. In June, the prototype of the first train produced by Electroputere VFU Pașcani came out of the factory with a new design. Last year, the GRAMPET Group consolidated its division in Hungary, where it has completed the acquisition of the land on which the Debrecen Vagongyár plant is built, while also preparing important investments for the modernisation and refurbishment of the plant. The company has continued comprehensive digitalisation process at group level. Currently, companies in the group are using almost 20 internally developed digital solutions, while another 18 such projects are under development.

In July 2020, Roserv Oil took over the industrial platform of RAFO Onești refinery with an objective to develop the largest logistics center in Moldova area, which could generate up to 600 jobs.

At the end of 2020, Assologistica, a representative association for the logistics industry in Italy, and the profile publication Euromerci acknowledged the GRAMPET Group for Innovation in Business Internationalization with the “Logistics’ Group of the Year” award.