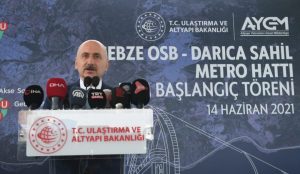 The Turkish Minister of Transport and Infrastructure Adil Karaismailoğlu has officially launched the Gebze metro tunnelling on June 14. The Gebze OSB – Darıca metro line will provide transport link between city’s main districts of Gebze and Darica, a district of Kocaeli Province in the Marmara region, facilitating the connection of the people of Gebze with Sahil and Marmaray.

“With this project we will create an important alternative to the road transport between Gebze Organised Industrial Zone [OSB] and Gebze-Darica districts. Our Gebze OSB-Darıca coastal metro Line will also be connected to Marmaray rail system at the Gar Station,” the minister said at the ceremony.

The tunnelling works will be completed in the first quarter of 2022. The train contract signed covers the delivery of 28 vehicles made in Turkey, which will feature advanced technology.

The first metro section between OSB and Gebze station will be opened by the end of 2023 with an investment of TRY 2.5 billion (EUR 237 million). “With the commissioning of the Gebze OSB-Darıca Coastal metro line, we estimate that the economic gain arising from fuel, time and environmental effects will be TRY 27.3 billion [EUR 2.6 billion] in the 25 years between 2023 and 2048,” the minister explained.

The foundation of the first bridge of Kanal Istanbul will be laid on June 26. The bridge will have a length of 860 metres and together with the associate viaducts will be 1.62 km-long. The most of the metro line will run underground excepting a 900-metre section.

The works began in 2018 and currently the constructor made a progress of 26 per cent of the construction of Gebze OSB-Darıca coast line which will be 15.4 km – long served by 11 stations.

The Gebze metro project also covers the construction of a depot and maintenance facility with a capacity of 68 trainsets on an area of 150,000 square metres, situated 1 km far from Gebze OSB station.

When completed, the new metro line will allow trains to run at a maximum speed of 80 km/h serving more than 330,000 passengers per day.

Following the ceremony, the Minister of Transport has paid a visit to the Türasaş Sakarya factory where country’s first EMU is manufactured and is expected to be put into operation by the end of 2021.

“The Gebze OSB – Darıca metro line which is under construction will offer multiple benefits for our country and will provide Darıca citizens modern transport services,” Yüksel Kara, the Governor of Darıca said at the ceremony.