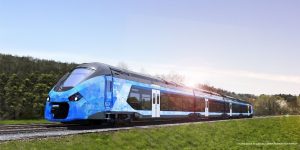 SNCF Voyageurs, on behalf of four French regions, ordered from Alstom the first 12 dual mode electric-hydrogen trains, with an option for two additional trainsets, from the Coradia Polyvalent range for Régiolis.

Auvergne-Rhône-Alpes, Bourgogne-Franche-Comté, Grand Est and Occitanie are the four regions which will operate the first hydrogen trains in France.

EUR 190 million is the value of the contract, of which the French government will provide EUR 47 million.

Three Coradia Polyvalent H2s worth a total of EUR 52 million will be deployed on Bourgogne-Franche-Comté railway network, between Auxerre and Laroche-Migennes.

Three plus the two optional trains will run in the Grand Est region, where also all the ordered trains will be manufactured – at Reichshoffen site.

The Occitanie Region will receive three hydrogen Régiolis trains which will operate on the Montréjeau – Luchon line which is expected to be reopened by 2025. The Alstom plant in Tarbes, situated in the Hautes-Pyrénées department in the Occitanie region, will be also involved in the production of the ordered trains. The region “the only one committed to the four  greening solutions for its regional trains – Régiolis Hybrid, battery train, bioGNV and hydrogen,” explained Carole Delga, the President of the regional council of Occitanie / Pyrénées – Méditerranée.

Under the contract, Alstom will deliver four-car, 72m-long trains. Each train will have a total capacity of 218 seats and the same dynamic performance and level of comfort as the dual mode electric-diesel version.

“France has everything it needs to become a hydrogen champion: the French government is fully committed to turning this ambition into reality,” said Jean-Baptiste Djebbari, Minister Delegate for Transport, French Ministry of the Ecological Transition.

It is fully in line with the Planeter programme to reduce the environmental impact of SNCF Voyageurs’ regional mobility solutions, based on the conviction that introducing more regional express trains (TERs) can significantly reduce CO2 emissions. Other French regions have already expressed their interest in participating in a second phase of the project.

This official French order for electric-hydrogen trains is the result of two years of joint efforts by the project’s various stakeholders. The dual mode electric-hydrogen Coradia Polyvalent train meets the requirements of France’s diverse rail network and has an autonomy of up to 600 km on sections of non-electrified railway.

Germany was the first country which ordered from the world’s first hydrogen train – Coradia iLint train developed by Alstom. In 2020, the train has successfully completed a year and a half of trial operation in Germany, where 14 Coradia iLint trains will enter operation from 2022.

In December 2020, following successfully trials in Austria, the Federal Ministry for Climate Protection and Mobility approved the innovative trains.

Following Coradia iLint trials on Groningen – Leeuwarden line, the Netherlands’ Province of Groningen reported that the train met the four objectives of the test frame.