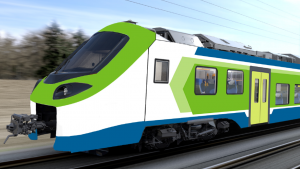 Ferrovie Nord Milano (FNM), the main transport and mobility group in the Italian region of Lombardy, awarded Alstom a EUR 160 million contract for the supply of six hydrogen fuel cell trains with an option for eight additional trains.

Alstom says that the first train is expected to be delivered within 36 months.

“We are immensely proud to be introducing hydrogen train technology to Italy, and we recognise the trust placed in us by our Italian customer. This development confirms Alstom’s role in defining the future of mobility,” Gian Luca Erbacci, Senior Vice President of Alstom Europe said.

The new hydrogen trains will be based on Alstom’s Coradia Stream regional train platform, which is dedicated to the European market and already being produced for Italy by Alstom’s main Italian sites. The hydrogen powered Coradia Stream for FNM, will be equipped with the same fuel cell propulsion technology used for the Coradia iLint trains.

The hydrogen version of Coradia Stream train will maintain the high standards of comfort already appreciated by passengers of its electric version. The hydrogen Coradia Stream will match the operational performance of diesel trains, including their range.

The hydrogen fuel cell trains for FNM are manufactured by Alstom in Italy. Project development, most of the manufacturing and certification are performed at Alstom’s site in Savigliano while the on-board signalling systems are delivered by the Bologna site.

In June Alstom entered an agreement with Snam, an energy infrastructure company, to develop in Italy the hydrogen trains and the needed infrastructure including the maintenance services.

The Coradia iLint is the world’s first passenger train powered by a hydrogen fuel cell, which produces electrical power for traction. The zero-emission train emits low levels of noise, with exhaust being only steam and condensed water. The train benefits innovative technology such as clean energy conversion, flexible energy storage in batteries, and smart management of traction power and available energy.