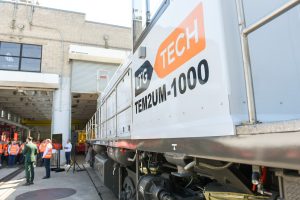 LTG Cargo, operating under the LTG Tech brand, has substantially renewed the old shunting locomotive, which is the first such project in the Baltic States. The unique renewal solution will not only ensure more sustainable and faster use of locomotives but also provides potential to customers from abroad which are already interested.

LTG Tech has modernised the TEM2UM-1000 locomotive (TEM2), which belongs to the popular series of shunting locomotives.

“More and more locomotive fleet managers are facing the problem that existing, older locomotives do not meet modern needs as they are quite polluting, and the costs of their use and maintenance are high. At the same time, there is a dilemma on what to do with the locomotives that are nearing the end of their service life – how to extend their use more safely and at the same time cause the least possible damage to the environment. Our team was looking for answers to these questions during the modernisation of TEM2,” Albertas Bajorinas, CEO of LTG Tech said. 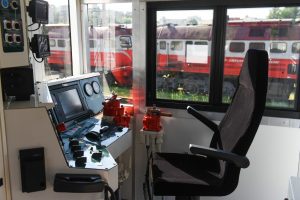 A such modernisation of the shunting locomotive not only pays off financially, but also has a positive impact on the environmental side, as it allows to save up to 30 per cent of fuel consumption and significantly reduces harmful nitrogen oxides (NOx). The upgraded TEM2 engine meets the highest Stage V standard in Europe.

During the refurbishment of the old locomotive, its frame was modified to allow the installation of new components and assemblies. The vehicle is equipped with a new Caterpillar C32 diesel engine, EMIT main and auxiliary generators, and a new Airpol SK30 compressor. All mechanical drives have been converted to electrical ones. A remote fuel metering system has been installed. The control circuit wires and power cables have been replaced, and video surveillance around the locomotive have also been installed.

The TEM2 crew cabin was also upgraded. The control panel was equipped with multifunctional screens for locomotive control, a comfortable, certified chair for railway transport operators, an autonomous heating and air conditioning system, and space for additional household appliances. To prevent COVID-19, the cab is also equipped with an ultraviolet lamp that disinfects frequently touched surfaces.

This is the first modernisation of such a locomotive in Lithuania, during which only components manufactured in the European Union and the USA were used.
“The average service life of locomotives is more than 35 years, so most of the vehicles currently in demand on the market reach the point of physical wear and tear – the old technology and the level of pollution are not satisfied. Our solution, which allows for a major overhaul of the old TEM2, is unique. By investing about 60 per cent of the price of a new diesel locomotive it is possible to have a vehicle that meets current requirements with modern equipment and a new economical diesel engine,” Bajorinas explaines.

The TEM2 locomotives can be used in the 1520 mm railway network, and customers from Lithuania and Ukraine are already interested in cooperation with LTG Tech. The analogue of this type of locomotive in Poland, in the 1435 mm gauge network, is ST48 vehicle, so this modernisation project can also be offered to customers from Poland.
The locomotive is fitted with a high-class emission 900 kW diesel engine which is more sustainable and more economical for operation.