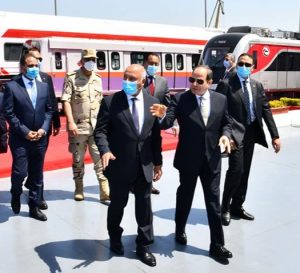 For the first time, entering service in Egypt, the passenger cars of the third class are equipped with an air conditioning system. The interior design of the new rolling stock is made in blue and orange colors. To protect from direct sunlight, curtains and blinds integrated between the double-glazed windows are used, which are controlled from the passenger compartment.

Each carriage is equipped with information boards, which indicate the date, time, information about the temperature both inside and outside the train, as well as the level of humidity. Information is displayed in Arabic and English. The color-graphic scheme of painting has been changed in comparison with the earlier batches of cars, and images of the Egyptian pyramids are used.

“Timely delivery and high quality of passenger cars for Egyptian Railways is a priority for TMH. Despite the difficult epidemiological situation, we send 35 wagons per month, we consistently maintain the level of operational readiness of the fleet at 97% and will continue to work in the same mode. By replacing more than a third of the passenger fleet of Egyptian Railways, TMH expects to contribute to improving the safety and comfort of rail transportation in the country,” Kirill Lipa said.

The delivery of the arrived railcars to ENR marks the beginning of the second phase of delivery of the cars manufactured at the Tver Carriage Works. To date, the first stage of the contract has been completed, within the framework of which the delivery of 500 third class cars with forced ventilation systems was carried out. In total, 38% of the order volume has been delivered to Egypt.

The new passenger railcars are manufactured under a EUR 1 billion contract covering the construction and delivery of a total fleet of 1,300 cars of which 500 third class coaches with forced ventilation, 500 third class, 180 second class and 90 first class coaches with air conditioning, and 30 second class dinning cars fitted with air conditioning.

The contract was signed in September 2018 and entered into force in May 2020, and its execution period will take 5 years.