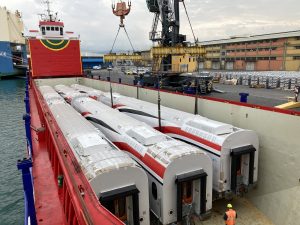 TMH has delivered the 300th passenger car to the Egyptian National Railways (ENR) from Dunakeszi plant in Hungary. The 6-car batch arrival at the Port of Alexandria takes the total amount of cars delivered to 301. By now, TMH has already delivered 23 per cent of the rolling stock order.

22 more coaches coming from TMH Tver factory in Russia are on their way and expected mid-April, TMH says. At the end of the month, the manufacturer will have executed a quarter of the order, 11 months after the contract entered into force.

Today, 284 passenger cars are operating on the Egyptian intercity network with an availability rate of over 97% to the full satisfaction of ENR. Warranty activities are conducted by TMH local teams in the depot of Abu-Ghates, which has been refurbished and equipped for this purpose.

These third-class passenger coaches are equipped with dynamic ventilation and provide 88 seats. They are offering transport services on the railway routes from the Egyptian capital of Cairo to the cities of Alexandria to the north (208 km), Asyut (380 km) and Sohag (473 km) to the south.

The production is now ramping up in Hungary to fulfill the 51% localisation rate required by the financing agreement concluded between Hungary, Russia, and Egypt. Today 90 employees are working in one shift on the ENR assembly line in the factory of Dunakeszi, acquired by TMH in June 2020. The site expects to double the number of employees on the line by end of the year and reach a monthly output of 25 coaches.

Tver factory, TMH competence centre for passenger cars, is the design authority in charge of transferring knowledge to their colleagues in Hungary and in Egypt.

The 300th passenger car is part of a EUR 1 billion contract signed in 2018 for the supply of 1,300 five-type coaches. The agreement includes 500 third-class cars with dynamic ventilation and 800 air-conditioned coaches, 500 third-class, 180 second-class, 90 first-class cars, and 30 coaches-restaurant. The lifecycle of the coaches in both continental and coastal environments of Egypt is 40 years.