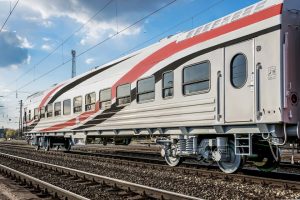 The financing agreement for Egypt passenger car contract  has entered into force as all the needed approvals were secured.

The Hungarian Eximbank and the Russian Roseximbank are providing the financial support for the EUR 1 billion contract signed by the Egyptian National Railways (ENR) and TMH Hungary.

The insurance coverage of the financing is provided by MEHIB in Hungary and EXIAR in Russia, which are the national export-import agencies of the two countries.

“The Egyptian project is among our top priorities. Not only it complements our expertise and ambitions, contributes to bilateral relations of Russia with Egypt and Hungary, helps expand Russian businesses’ international presence, but it also contributes to the development of the Russian transport industry,” Kirill Lipa, the CEO of TMH, said.

Under the Egypt passenger car contract, TMH Hungary will deliver Egypt 1,300 coaches. The Russian-Hungarian consortium will manufacture 500 3-class coaches with forced ventilation, 500 3-class, 180 2-class and 90 1-class coaches with air conditioning, and 30 2-class diners with air conditioning. All vehicles will be prepared for continental and coastal climate of Egypt, with a projected lifecycle of 40 years. The contract’s execution period will take 5 years starting from its effect date.

Currently, two 3-class prototypes are produced. One prepares for a trial run on ENR’s track in Egypt as in March has arrived at Alexandria Port, while the other expects the end of the certification procedures in Hungary.

In October, the two prototypes were unveiled and presented to the Egypt Minister of Transport, Kamel al Wazir, during a visit at Tver Carriage Works plant.

The approval to begin the production of these first two cars was granted in August 2019.

The coaches are expected to operate for 40 years and will be designed with corrosion-resistant steel alloy car bodies as well as moisture-proof and heat-insulating materials.