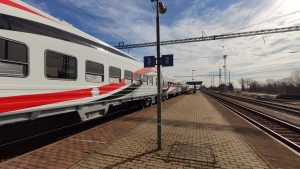 The both prototypes of passenger coaches for Egyptian National Railways, manufactured by Tver TMH Plant, performed noise certification tests on the Hungarian railway network between Mezőtúr and Tiszatenyő. Tests were performed at the speed of 80 km/h and 120km/h.

During March, dynamic tests for braking will be carried out also in Hungary.

The Hungarian KTI Research Institute is responsible for the certification of coaches for ENR.

In October, the Russian-Hungarian consortium TMH Hungary has presented to the Egyptian Minister of Transport the prototype for the two third-class passenger cars. The consortium will supply the national transport operator 500 third-class cars, with the first deliveries expected within the next months.

This is part of a EUR 1 billion contract signed in September 2018 for the supply of 1,300 passenger cars in 5 types of coaches, including cafeteria cars.

According to ENR requirements, the new coaches will be developed be to compliance to TDA.

Tver Carriage Works, as part of the consortium, is a key manufacturer of components and is also in charge with the transfer of technology and industrial organisation. TMH Engineering is responsible for the coaches’ design and project technical review, while the Hungarian member of the consortium will be the manufacturing and financial partner in the project. It is expected that half of the awarded number of cars will be manufactured at Hungarian facility Dunakeszi Jarmujavito Kft. in cooperation with TVZ. The rest of the new coaches are to be manufactured at TVZ plant.