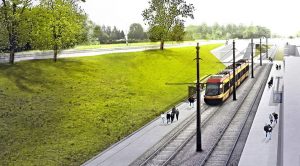 Under the 2019 CEF transport calls for proposals, Warsaw integrated transport system development is supported by the EU funding. The City of Warsaw has submitted a project on the analysis of the options for the development of an integrated transport system in the city using the metro transport and multimodal interchanges. EUR 4.17 million was the total eligible cost which received over EUR 2 million, representing a 50% EU support. Under this project, the authorities will prepare an analysis of the options for developing an integrated transport network in the Warsaw node of the TEN-T core network through streamlining connections with transfer nodes for long-distance railway and bus transport, and indirectly air transport, with railway connections with the Warsaw Chopin Airport and the Warsaw Modlin Airport, based on the development of the metro network and the creation of Warszawa- Centrum and Warszawa-Wschód multimodal transfer nodes in the area of the Central, Sródmiescie and Wschodnia railway stations.

Under the submitted project, five options are being considered for the studies and analyses. The first one includes the study on the development of the metro system in Warsaw, an analysis of the potential routes and the target outline of the underground network.

The second option considers the pre-design documentation and building permit design for stations A12 and A16 on Metro Line M1 in Warsaw, together with the extension and redevelopment of accompanying infrastructure. A new version takes into account the analysis of the possible options of connecting the Centrum Station of metro line M1 with the Warszawa Sródmiescie/Warszawa Centralna stations. The fourth option includes a technical feasibility study of metro line M3 with the Kozia Górka Technical & Holding Station in Warsaw – Stage 1 – Praga.

The last option will see a technical feasibility study of the constriction of the Warszawa-Wschód multimodal transfer node.

The integrated transport system is a strong commitment to transform capital’s public transport. In 2019, the railway infrastructure manager, PKP PLK has presented Warsaw master plan which involves the reconstruction of the existing diametral railway lines between Zachodnia (Warsaw West) and Wschodnia (Warsaw East) stations. The strategy will develop city’s railway node which will create more capacity for regional and long-distance services, will enhance the public transport services and will provide additional capacity for rail freight transport.

In July, a contract was signed for the reconstruction and development of Warsaw West station which will see a new 30 km rail system which will offer direct rail services to the Chopin Airport.

The modernisation city’s rail stations will be performed as PKP PLK has announced in April the tender for Warsaw rail agglomeration to support the creation of transport nodes providing connected and more comfortable transport services.s