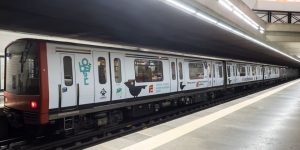 The European Commission has approved a EUR 83 million funding from the Cohesion Fund for the expansion of Lisbon metro network. The project has also received a EUR 127.2 million national financing from the Environment Fund.

The EU funding will support the construction of the circular line connecting the Yellow Line with the Green Line. The Yellow line is providing metro connection in the area with the highest employment density in Lisbon.

“This project will bring lots of benefits to the Lisbon metropolitan area: smoother connections among all forms of public transports, shorter travel times, reduced CO2 emissions and better access to these services, including for people with reduced mobility,” Commissioner for Cohesion and Reforms, Elisa Ferreira, said.

The project envisages the construction of a metro section as an extension of the Yellow Line, from Rato station to the Cais do Sodré station, on the Green Line, as well as the construction of two new metro stations. The future Estrela station will be located on the Calçada da Estrela in front of the Basilica da Estrela, with access at the south end of Jardim da Estrela.

The new Santos station will be constructed between the Avenida Dom Carlos and Rua Francesinhas and Rua dos Industriais, providing two entrances.

In June the construction contract for the expansion of Lisbon metro was signed.

EUR 210.2 million is the total value of the project of which EUR 67.6 million will be used for the acquisition of 14 three-car metro trainsets, as well as the information, security and video surveillance systems. On the section a new CBTC system will replace the obsolete system installed in the 70’s, which will allow continuous control of the movement of trains and an increases frequency and regularity.

The new metro section is expected to enter operation in 2024.