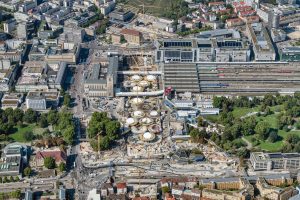 Under a EUR 127 million contract, Thales will install the digital signalling system and the ETCS as part of the Digital node Stuttgart included into the “Digital railways Germany” programme which will add up to 20% extra capacity to the rail network. Thales won the tender covering the implementation of modules 1 and 2 of the Digital node Stuttgart project until the end of 2025.

The contract also covers the preliminary work for the implementation of the track-side automatic operations and the capacity and traffic management system (CTMS), a modern technology and operating site, in excess of 6,000 electronic kilometre markers (balises), more than 1,300 axle counting points and approximately 650 point machines.

“The first digital node in Germany is going to be the reference point for other metropolitan regions throughout Europe for years to come. Together with Deutsche Bahn AG, DB Netz AG, DB Projekt Stuttgart-Ulm GmbH and all project participants we are pleased to help design the blueprint for future digitizing projects”, Oliver Dörre, Chief Executive Officer and Country Director Thales Deutschland, said.

Starting 2025, the long-distance and regional trains, as well as the S-Bahn train fleet will run on the Stuttgart rail node, travelling on a network equipped with the latest digital technology. In addition to the new main station and other stations, tracks with a scope of more than 100 km are the first to be equipped with digital signalling technology, the train control system ETCS and highly automated operations. Stuttgart is thus the origin and blueprint of digitizing the entire German rail network, scheduled to be completed almost in its entirety by 2035.

For the development of the S-Bahn, the Digital node Stuttgart project is also an important step into the future. On the main S-Bahn route, Germany’s most modern signalling system will in future control the shortest ever implemented block sections of only 30 meters in length. S-Bahn trains will therefore travel in closer succession than anywhere in Germany so far.

Recently, the European Commission has approved a state aid to support the digitalisation of the 100 km-long Stuttgart railway network.