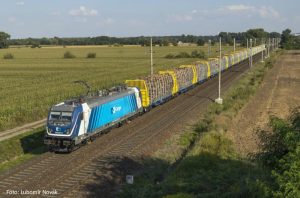 The project consists of the acquisition of 50 electric locomotives and 140 freight intermodal wagons as well as retrofit of around 310 older locomotives with European Railway Traffic Management System (ERTMS).

The EIB funding can be drawn for a period of 36 months from the effective date of the contract. Under EIB conditions, these funds can cover up to 50 % of the investment costs of specific projects. The signing of the agreement was preceded by an extensive financial analysis by the EIB, on the basis of which ČD Cargo was assessed as a reliable and suitable partner for drawing an investment loan.

The investment related to the European Railway Traffic Management System could be complemented by a grant component from the CEF Transport Blending Facility, designed to promote projects contributing to the environmental sustainability and efficiency of the transport sector in Europe.

“Our partnership with CD Cargo will improve the capacity, safety and quality of freight services in the Czech Republic, notably through the use of modern control and signalling system. By promoting a shift from road to rail transport, this project will have a positive impact on the environment and will thus contribute to supporting the transition of the Czech Republic to a low-carbon economy, in line with the objectives of our recently approved EIB Climate Bank Roadmap and of the Transport Policy of the Czech Republic,” EIB Vice-President Lilyana Pavlova said.

The EIB financing will support the contract signed by CD Cargo and Bombardier Transportation in 2018 which covers the supply of up to 50 Traxx MS3 locomotives. By the end of 2022, the Czech railway operator can use the contractual option to order 40 additional locomotives.

The new EIB loan will support CD Cargo in its ambitious intermodal transport development plan, which aims at responding to the growing market and brining its fleet in compliance with European interoperability requirements.