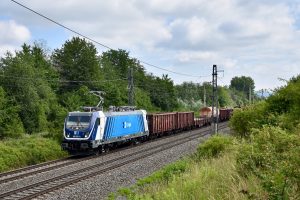 The trials have started at the beginning of July on the Ostrava – Česká Třebová – Ostrava railway route. After the completion of the trial process, the new locomotives will enter regular transport services on the railway routes from Planá u Mariánských Lázní and Havlíčkův Brod to Hněvice.

In mid-August, the locomotives will be used on the Western express railway network.

These locomotives are part of an agreement signed in 2018 by ČD Cargo and Bombardier Transportation for the delivery of 50 locomotives with an initial order for 10 locomotives.

The Czech state-owned rail freight operator will use the locomotives for freight and passenger transport in the Czech Republic, Slovakia, Germany, Austria, Poland and Hungary while extending the fleet’s operability to Slovenia and Croatia.

The Traxx MS3 locomotives are the first vehicles to be fully compliant with the new Czech electromagnetic compatibility standard, which is one of the most stringent in Europe.

The procurement of the new locomotives is part of ČD Cargo’s plan to modernise its fleet to reduce the emissions and to provide environmentally friendly services.

Recently, the company and the Ministry of Industry and Trade signed an agreement to increase the energy efficiency and consume less energy. ČD Cargo’s commitment will help the Czech Republic to fulfill its obligation under the Directive 2012/27/EU on energy efficiency which states that in 2021-2030 at least 0.8% of final energy consumption must be saved annually with the aim to improve the climate and the environment.

Thus, ČD Cargo will replace its fleet with new vehicles equipped with regenerative braking system allowing energy savings. The company plans to modernise its diesel locomotives improving their technical and environmental parameters. It is also preparing to use hybrid locomotives which will bring fully emission-free operation in the future. The gradual change of the vehicle fleet also applies to wagons, where rolling stock with lower noise level are acquired.