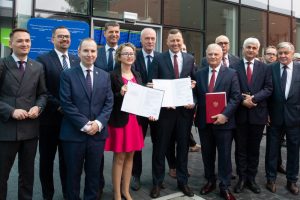 The Solidarity Transport Hub company (Centralny Port Komunikacyjny, CPK) has signed a contract for a feasibility study on the construction of Ostrołęka-Łomża-Giżycko rail section which will deliver Lomza (in north-eastern Poland) passenger rail access. This is one of the largest Polish cities that currently does not benefit rail connection.

The PLN 20 million (EUR 4.4 million) contract signed with a consortium comprising Egis Rail, Egis Poland and Jaf Geotechnika that was selected based on its bid regarding the price (70%) and staff experience (30%).

The consortium will have 14 months to prepare the key three phases of the feasibility study.The implementation of the entire contract may take up to 19 months, because the order on the Ostrołęka – Łomża section also includes geological documentation and maps for design purposes.

As part of the technical, economic and environmental study (STES), an analysis of the routes of the planned railway line and additional specialist studies will be prepared. The CPK company will indicate the preferred route of the line to conduct further preparations.

The signed contract concerns a 140 km rail line, a key section on the No. mainline planned by the CPK in the north-east of Poland. The first construction works between Ostrołęka and Łomża are expected to start in 2023 and last until the end of 2027. For the section from Łomża to Giżycko, the scheduled period of construction works is 2028-2031.

The line, so-called No.3 will cross three voivodeships – Mazowieckie, Podlaskie and Warmińsko-Mazurskie.

This is the fourth contract signed under the CPK rail development project and it is one of the eight completed tenders for preparatory works for the planned routes. 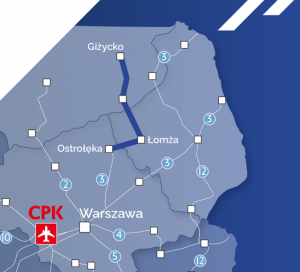 Thanks to investments related to the CPK, approx. 56 km of new railway lines will be built in Podlaskie Voivodeship, and another 265 km will be modernised.

“Today, Lomza is one of the largest cities in our country with no passenger rail access. After the construction of the No. 3, this will change, and the travel time from Warsaw to Łomża will be 1 hour and 15 minutes. Through CPK investments, we will consistently eliminate further examples of the communication exclusion of Polish cities, removing the missing links of the rail network,” the Deputy Minister of Infrastructure Marcin Horała, said.

The construction of No. 3 line CPK – Warsaw – Tłuszcz – Wyszków – Ostrołęka – Łomża – Pisz – Giżycko will bring numerous benefits for passengers.Not only Łomża, but also Kolno and Orzysz will be included in the network of long-distance rail passenger connections.The first of these cities, Łomża, has been waiting for passenger trains since 1993. Orzysz, the third one, is only reached by freight trains from the direction of Ełk.

The new line will significantly cut the travel time, will improve the capacity of the existing railway lines and will meet the demand for regional and freight transport.

The new connection will develop the rail transport and will deliver access to public transport. “The investment will ensure attractive travel times, greater tourist potential and the inclusion of new cities in the nationwide railway network,” said Mikołaj Wild, the President of the CPK company said.