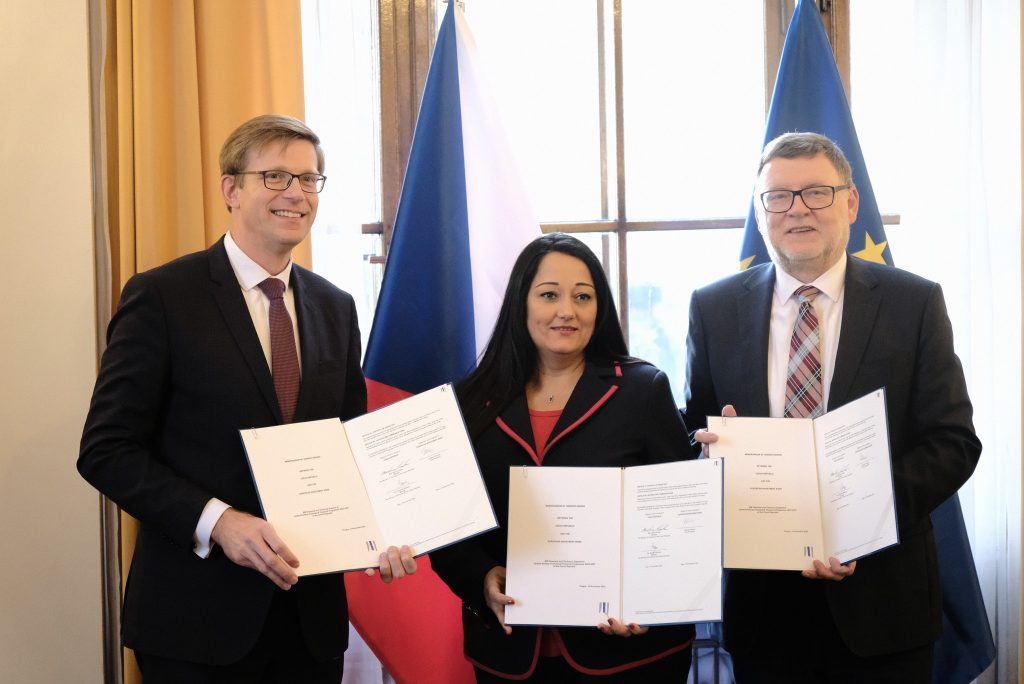 The Czech Minister of Transport Martin Kupka, the Minister of Finance Zbyněk Stanjura and the EIB Vice-President Lilyana Pavlova signed an agreement for technical and financial support for the implementation of the Czech Unified Railway Framework implemented by the Ministries of Transport and Finance.

The two sides will collaborate and explore the possibility of receiving up to EUR 7 billion for the reconstruction and modernisation of country’s rail network and increase the role of railways in the national transport system.

Under the MoU signed on November 10, 2022, in Prague, the government and EIB will work to identify the optimal model of EIB’s involvement in the rail projects to be implemented by Czechia.

“The need for investments in transport infrastructure exceeds the current possibilities of the state budget, which is why we have announced that we will supplement them with other financing instruments, such as loans from the EIB. We are signing the memorandum because, with a prospect of the upcoming construction of the Czech high-speed railway network, we want to cooperate with the EIB in the long term,” the Minister of Transport Martin Kupka said.

The Czech government intends to draw CZK 170 billion (EUR 7 billion) from the EIB in the next five years and expects that next year would obtain an initial tranche of CZK 25 billion (EUR 1 billion). “The money should go towards investment in digitization and automation of railway transport, investments in the electrification of railway lines and the support of regional transport,” the Minister of Finance Zbyněk Stanjura, said.

The agreement declares both parties’ intention to enter the financing of the pre-selected investments within the period 2023-2027.

The EIB funds will be used to co-finance and supplement the European Union resources available under the Next Generation programme and the multi-annual financial framework for the period 2021-2027, in particular the Recovery and Resilience Facility (RRF), the Transport Operational Programme 2021-2027 and the Connecting Europe Facility (CEF).

“EIB wants to step-up our support for the modernization of the railroad network in the Czech Republic and contribute towards safer, green, and reliable transport alternatives Czech citizens and businesses can benefit from,” the EIB Vice-President said.

The financing provided by the bank will be focused primarily on large projects along the railway corridors and hubs belonging to the TEN-T network, including the modernisation of catenary system as well as the electrification of the existing lines planned for the next ten years. The financing will also support the adaption of the infrastructure to allow the introduction of zero-emission trains and the preparation of high-speed rail projects.

With the new funds, Czechia plans to electrify the regional lines until 2030 and to install digital and automation solutions to increase the rail capacity and improve safety and interoperability. The EIB loans will also enable integration and connection between different modes of transport and will support the development of a sustainable transport system in the country.

The investment in transport infrastructure is one of government’s priorities to recover the economy and achieve its commitments for a green and sustainable economy and industry which are now affected by the inflation and rising energy prices. Under the State Fund for Transport Infrastructure (SFDI), the government approved a record investment of CZK 150.9 billion (EUR 6.2 billion), with a target of CZK 30.7 billion (EUR 1.26 billion) expected to come from EIB loans and bonds issued by the SFDI. The structure and parameters of this financing will be submitted to the government for approval.

These projects include the modernisation and construction of a double-track electrified line on the Praha-Bubny – Praha-Výstaviště route which is part of the Prague – Kladno line which will provide transport connection to the Prague Airport. This project includes the construction of a new station (Praha-Bubny) and track quadrupling and electrification works, the construction of a new stop (Prague-Výstaviště stop), the replacement of signalling system and removal of existing level crossings. The new station will provide direct transfer to the Prague metro system through the Line C (Vltavská station) and to the city’s tramway network and in the future, the station will be part of the new high-speed railway.

Other projects cover the modernisation and reconstruction of existing train stations prioritising the ones in the metropolitan areas.

The National Recovery and Resilience Plan highlights investment in transport sector as part of the green transition theme with a budget of EUR 3.5 billion (CZK 85 billion), focusing on sustainable modes and infrastructure which can reduce the disparities, ensuring regions a sustainable economic growth and providing capacity to move large volumes of cargo and passengers. Part of the Plan, the rail transport projects cover electrification and digitalisation including the ERTMS deployment as well as infrastructure modernisation and expansion.