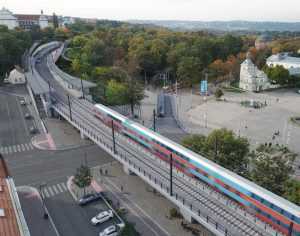 SZ the Czech rail infrastructure manager has announced a tender for the modernisation of Praha-Bubny – Praha-Výstaviště line including the station as part of the Prague – Kladno railway line, with a dedicated rail connection to Václav Havel Airport Prague.

The highest admissible bid price for the contract is CZK 3.8 billion (EUR 149.5 million). By the implementation of this construction, it will begin a major transformation of Prague’s Holešovice district, which will be transformed by a completely new district and will benefit the Bubny railway station. The modernisation will be completed by 2025 and will become one of the pillars of the future development of the entire area.

“The announcement of the tender for the contractor is an important milestone for the entire modernisation of the line from Prague to Kladno and the airport. The old railway station has been dividing Holešovice into two disparate parts for a long time, while the new railway will, on the contrary, naturally connect the two parts,” Jiří Svoboda, the Director General of Správa železnic said.

The most significant element of the modernised line will be the new railway station Praha-Bubny, which will be built behind the Negrelli viaduct and connected by an underground vestibule with the metro station C Vltavská. The station, designed by the Jakub Cigler Architekti architectural studio will have three platforms and four tracks. The design of Praha-Bubny station will have two different phases. In the first phase, when it will be the only building in the area, a green resting area will be created on its roof, allowing people to have a view on the city and the changing Holešovice. In the second phase, an office building will be built directly above the station along with the construction of the new district. The station lobbies will then house several commercial premises that will serve both passengers and residents of the future new Bubny-Zátory district.

The station, together with the new Prague Philharmonic Orchestra building, will be the natural centre of the new Holešovice district. It will also be one of the key elements of its transport services. The modernised railway will serve as an important transport hub across Prague 7 and Prague 6. As part of the modernisation of the Bubny – Výstaviště section, a railway stop Praha-Výstaviště will be built on the edge of Stromovka Park, whose architectural design will be the responsibility of dh architects and which will significantly relieve Prague’s integrated transport, especially at times when mass events such as trade fairs, concerts or sports matches will be held at the Prague Exhibition Centre.

New footbridge over the railway line will improve the connection between Stromovka and Letná as well. The railway will also have similar benefit for the attendance of concerts in the Prague Philharmonic Orchestra building or in the case of mass events at Prague Letná.

The modernised line will lead in the Bubny – Výstaviště section for the most part along a new elevated track, which will enable the consolidation of Holešovice into one functional area.

At the same time, the project covers the removal of the railway crossing on the Bubenská Street and also the raising the bridge structure in Dukelských hrdinů Street, where in the past, due to its low height profile, tram overhead contact line was repeatedly torn down by inattentive lorry drivers.

In October, SZ announced a CZK 4 billion (EUR 157.4 million) tender for double track and electrification works on the 5 km Kladno – Kladno-Ostrovec rail section. The works on this section are expected to start in 2022 and to be completed in 2024.

The project on the 29 km Prague – Kladno railway line involves track-doubling and electrification of the entire route including the connection section to the airport and an underground station (at the airport). In December 2020, SZ announced the preferred route for the railway to Prague airport.