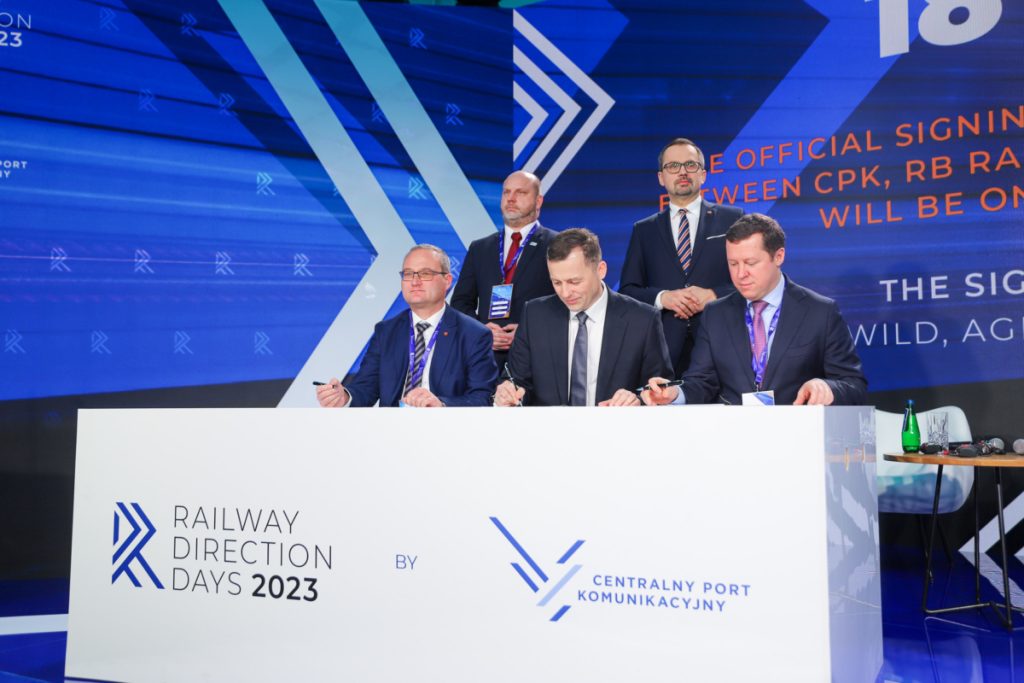 Centralny Port Komunikacyjny (CPK), RB Rail AS and Správa železnic, the Czech rail infrastructure manager, have signed a cooperation agreement to create the Three Seas HSR network. The agreement was signed at the Railway Direction Days 2023 (RDD 2023) taking place on 18-19 January in Warsaw.

“The Three Seas Region is one of the fastest growing areas in Europe. Over the past 20 years, the region’s GDP has grown almost twice as fast as the ‘original EU’. These rail projects are tailored to the needs of individual countries and the Three Seas region as a whole. The new HSR network, which is the CPK railway investment, together with other projects in the region such as Rail Baltica and V4, will form the future railway backbone of the Three Seas Region and an important part of European TEN-T transport network,” said the Deputy Minister for Funds and Regional Policy, Marcin Horała, the government’s plenipotentiary for CPK.

Under the Memorandum of Understanding, the three sides will jointly cooperate on the implementation of the projects.

EUR 60 billion is the total estimated value of the region’s HSR network which is expected to bring benefits of more than EUR 120 billion. This means that, in the long term, the new high-speed railway network will generate twice the value than its initial cost. According to the calculations, EUR 55 billion represent passenger journey time savings and EUR 57 billion are the other benefits of the project, including, among others, those resulting from a decrease in transport accidents.

By 2028, the time of the planned launch of the first stage of the CPK airport, the first section of the Warsaw – Łódź high-speed rail being planned today by CPK should already be operational, as well as the completion of modernisation of the Rail Baltica route by PKP PLK from the Lithuanian border via Białystok to Warsaw.

According to the plan by 2030 the whole Rail Baltica cross-border corridor should be completed in Estonia, Latvia and Lithuania. The line will run from Tallinn via Riga and Kaunas, with a connection to Vilnius, to the Polish border. The first sections of Rail Baltica railway lines are planned to be launched starting 2027.

“Considering the scale and impact of the Rail Baltica Global project not only in the Baltic states, but also the whole Europe, we must recognise benefits and use the full potential from strengthening cooperation with other megaprojects. We have already made significant progress by establishing regular cooperation formats with Centralny Port Komunikacyjny, and will be honoured to now extend the cooperation also with the national railway infrastructure manager in the Czech Republic,” Agnis Driksna, CEO of RB Rail AS said.

The assumption is that a section of the V4 HSR line between Prague, Brno, Bratislava and Budapest will also be built at this time. In the following years, next sections from Poland will be connected to the V4 railway line such as Katowice-Ostrava and so-called Małopolska-Silesian Node.

“The cooperation between railway infrastructure managers in the region is viewed by Správa železnic as a cornerstone for future rapid development in the 3Seas area. Faster travel between hubs, better service quality to passengers, improved safety as well as alleviating capacity on conventional rail for freight seem to be the major benefits that will boost economic growth and multi-lateral relationships across the region. Given the long term nature of these projects we understand we must not miss this crucial momentum to invest now in the future, as the positive benefits will be enormous not only for our countries but also for the whole of Europe,” Radek Čech, Director International Affairs Dept. of Správa železnic added.

Thanks to joint investments, there will be, for example, a 1,700 km Tallinn – Warsaw – Katowice – Budapest connection as well as Tallinn – Warsaw – Wrocław – Prague rail route totalling 1,500 km, including 400 km along CPK’s “spoke” no. 9.

The Three Seas HSR network is expected to have a total length of 4,500 km. “This is the unique, one-of-a-kind time in our common history when, functioning together in the region, we can create an unrivaled rail transportation offering. We are drawing lessons from HSR investments in the West. As a result, our projects can bring about an economic domino effect, giving a boost to other industries and sectors,” Mikołaj Wild, CEO of CPK said.

In addition, the project delivery organisations have the support of international allies, who point out that the planned infrastructure will be dual-use, that is civil-military.

“Current events have shown that reliable and resilient rail infrastructure is so incredibly important for the safety and security of the region.  An investment in this infrastructure is an investment into the long-term security of the region.  It is just as important as our collaboration on national security, energy security, and defense,” Mark Brzezinski, US Ambassador to Poland said at the conference.

The planned HSR system in the Three Seas Region area will be cost-effective, as confirmed by a report presented at Railway Direction Days by Steer, an international consultancy which performs analyses for the European Commission.