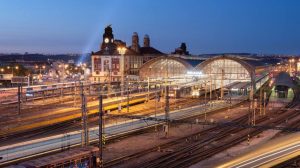 The construction is expected to start by the end of 2023 and will be completed within 68 months (5 years and a half).

The newly built or renovated platforms will have a total length of 2.7 km. More than 58 km of tracks will be upgraded, and a total of 400 switches will be modified. Under the project, 30 bridges and 15 culverts will be renovated. The entire railway station will be connected to the remote control from the Central Dispatch Office in Prague.

The passengers will gain barrier-free access to the platform, which, thanks to the standard height of 550 millimeters above the track, which will allow comfortable boarding. The existing underpass will be extended to replace the old one, which is used to access the site behind the station and a footbridge will be constructed. All platforms and exits from the underpass will be equipped with a new roof.

As part of this investment project, the rail sections to Třebovice in Bohemia, Opatov and Dlouhá Třebová will also be rebuilt. Along these sections, the bridges will be reconstructed, and the tracks dedicated to freight transport at the station will be modified.

The construction work will be divided into more than two dozen consecutive stages to ensure smooth railway operation on all times. CZK 10.4 billion (EUR 409.5 million) is the total estimated value of the project.

Currently, the trains cross the rail system at a maximum speed of 60 km/h, and thanks to modernisation work the speed will be increased to 80 km/h. The project will significantly reduce the travel time for all trains travelling through the junction.

Another important goal of the planned construction is to reduce the negative effects of railway transport, increase traffic safety and also passenger comfort.

The Ceska Trebova railway node plays an important role for both rail passenger and freight transport and must be modernised ads it underwent the last major reconstruction in the 1950s.