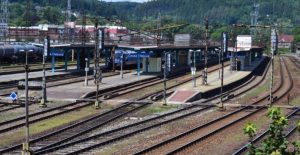 The Czech railway infrastructure manager SZ has announced a project documentation tender for the modernisation of Ceska Trebova rail junction. CZK 274.8 million (EUR 10.5 million) is the estimated value of the contract and is expected to be completed in 2023.

The winner will elaborate the necessary documentation for the building permit to allow the modernisation of the junction which covers the extensive reconstruction of the entire rail node which plays an important role for both passenger and freight rail transport services. The project will take five years to be completed.

Under the plans, the entire Ceska Trebova passenger station will undergo reconstruction, and the technical parameters for the needs of freight transport will also be improved. Adjacent sections to Třebovice in Bohemia, Opatov and Dlouhá Třebová will also being modernised. The work on these sections will include, among other things, the reconstruction of bridge structures providing level crossing of tracks from the freight tracks of the station and other financially demanding construction modifications will also be implemented.

More than 58 km of tracks will be upgraded, and a total of 400 switches will be modified.30 bridges and 15 culverts will be renovated. The entire railway station will be connected to the remote control from the Central Dispatch Office in Prague.

Another important goal of the investment project is to reduce the negative effects of rail transport, and to increase the traffic safety and passenger comfort. This will be done by the layout of the platform which will provide barrier-free access and through a standard height of 550 millimeters above the track, the platform will offer comfortable boarding. The newly built or renovated platforms will have a total length of 2.7 km.

The Ceska Trebova rail junction underwent the last major reconstruction in the 1950s during the electrification of the entire main line from Prague to the east of the country.  Today, the trains passing through the passenger station run at a maximum speed of 60 km/h. Thanks to the modernisation, the speed will increase to 80 km/h which will significantly reduce the travel time across the whole junction.

The total investment of the construction works is estimated at CZK 10.4 billion (EUR 397.85 million). This will be the largest comprehensive modernisation of the railway junction across the railway network. In October, the infrastructure manager has started the works for the modernisation of Pardubice rail node.