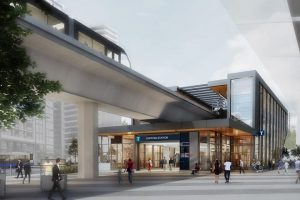 TransLink and City of Richmond launched the construction works for Capstan station on Canada Line SkyTrain which will deliver better transit to the city and the Capstan Village area.

“Capstan station will be the cornerstone of making Capstan Village centred around zero-emission, fast, and reliable transit. This growing urban community is projected to bring up to 16,000 new residents to Richmond, and this new transit station will help position our city as an even more attractive place to live,” Richmond Mayor Malcolm Brodie said.

On the average weekday in 2019, there were more than 37,000 passengers riding the Canada Line between those two stations and the new station will provide increased access and better travel options.

The station is being built to support the growing development in the area and to provide customers with convenient access to the SkyTrain network. This exciting project will deliver a safe, efficient, and environmentally sustainable transport option for the Capstan Village area, which projects up to 16,000 residents once nearby developments are completed.

The new station is expected to be opened in 2023 providing easier access to rapid transit system between Bridgeport and Aberdeen stations.

The Canada Line is part of the SkyTrain transit line running from Vancouver to Richmond, connecting the Vancouver International Airport.