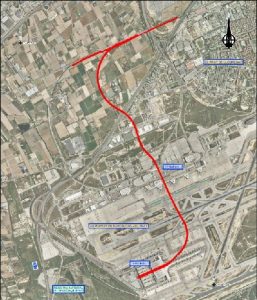 The Adif Board of Directors authorised a EUR 64.65 million contract for the construction works of the second phase of new rail access to terminal T1 at Josep Airport Tarradellas Barcelona-El Prat. The contract was awarded to the Unión Temporal de Empresas (UTE) consortium, comprising Comsa and Comsa Instalaciones y Sistemas Industriales. The works are expected to be completed within two years.

The works include the connection with Barcelona – Vilanova conventional line the adaptation of the road access, the structures and earthworks for the corresponding connection of the new rail, drainage works, as well as the tracklaying, the electrification system and the security and communications facilities of the new branch line.

The new double-track begins on the Barcelona – Vilanova conventional line, and runs to the terminal T1, with an intermediate stop at terminal T2, where it will connect with Barcelona metro line 9. It has a total length of 4.5 km, including a 3.4 km tunnel, of which a 3 km passage through the T2 multimodal station has been excavated. 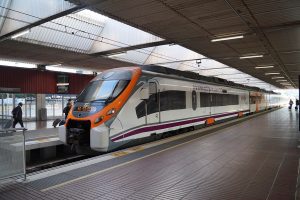 In addition, at the stations of the T1 and T2 terminals, the project includes architectural work on platforms and structures including the furniture, and facilities such as sanitation, water, electricity, lighting, air conditioning, and ventilation or fire protection.

The project is financed by the Next Generation EU recovery instrument.

The new rail access, which will generate significant benefits for the public transport in the Barcelona metropolitan area, will allow the establishment of direct commuter services to the two airport terminals from Manresa and Maçanet via Barcelona through the current lines R2 and R4, allowing access to the remaining commuter lines and the Barcelona metro network.

In addition, it will be able to provide shuttle services between the airport terminals and the Madrid-Barcelona high speed railway line towards the French border.

This will also make possible to connect both terminals within the Barcelona city area establishing a travel time between Sants station and terminal T1 of approximately 19 minutes.

Forecasts estimate that between 7 and 9 million passengers per year will benefit from the new rail infrastructure.

The first phase of this project, with an estimated investment of EUR 305 million, consisted of drilling with a TBM of the main section of the new access.