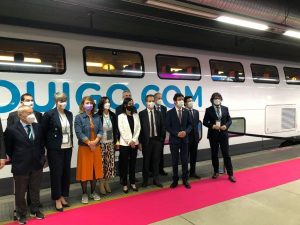 On May 7, Ouigo España, a Spanish subsidiary of SNCF, started its low-cost high-speed train services on Madrid-Barcelona route, operated by Avelia Euroduplex trains.

Pedro Saura García, the Spanish State Secretary for Transport, Mobility and Urban Agenda and Helene Valenzuela the president of Ouigo España inaugurated the train services. “The liberalisation of the rail transport will increase the competition and attract more passengers to use this transport mode. This is crucial to decarbonise the transport sector and our economy and to combat the climate change,” García said.

In December 2020, Ouigo España launched its tickets sales from EUR 9 for its low-cost high-speed train services between Barcelona and Madrid. For an extra EUR 9 per passenger the operator offers travellers a package that includes numerous extra services such as choosing a seat for maximum comfort, reserve an XL seat, an extra piece of luggage and access OuiFun, the on-board entertainment service for all ages with a wide selection of films, series, cartoons, podcasts, magazine programmes and games.

The operator will provide in total 10 daily departures linking Madrid and Barcelona with a time trip of two and a half hours, with stops in Zaragoza and Tarragona.

“After many months of work, we are proud to announce that we have started the rail services provided by our trains,” Helene Valenzuela said. 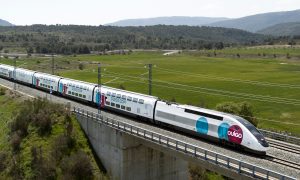 Following on from these first four trains, 10 other trains are currently being converted by Alstom to serve several high-speed routes in Spain. Initially, the trains operate on the Madrid – Valencia and Madrid – Alicante rail lines and subsequently, in Andalusia, on the Madrid – Seville and Madrid – Malaga lines. Ouigo España will thus have a fleet of 14 trains for five destinations departing from Madrid to Barcelona, Valencia, Alicante, Seville, and Malaga.

During the conversion process of the trains, Alstom developed and deployed on-board signalling equipment architecture, necessary for rail traffic safety and performance, based on its digital ERTMS solution Atlas. This solution ensures that Avelia Euroduplex trains are compliant and can be approved for Spanish infrastructure.

Alstom needed 17 months to convert and approve the first four trains on the Madrid-Barcelona route. The conversion included the design, industrialisation of signalling equipment and integration into the existing train. 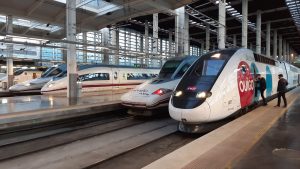 “This entry into commercial service marks another historic step for Alstom, which is committed to working alongside our customer SNCF. The implementation of this project is further proof of the confidence international operators have in Alstom main line signalling system in Europe, while indicating our ability to guide these operators towards the success of their expansion plans in European rail markets that are open to competition,” Jean-Baptiste Eymeoud, the President of Alstom France said.

The new signalling equipment architecture was developed and validated by Alstom’s digital mobility experts in Saint-Ouen, France. The conversion of the power cars and train testing is being carried out at Alstom’s Belfort site, with the assistance of the component French sites in Villeurbanne for the modification of the electronic equipment, Tarbes for modification of the wiring harnesses and Le Creusot responsible for adaptation of the on-board signalling sensors on the bogies.