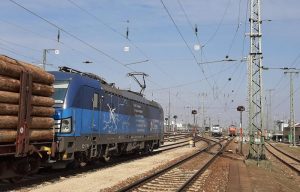 Following the approval from EBA, the German Rail Authority, ČD Cargo enters German market with one destination under the project which is expected to be further developed.

With Ingolstadt as the first destination ČD Cargo operates now in Germany one month after the operator completed the legislative process of obtaining the documents needed to provide rail transport services in Germany.

A block train was hauled by a Vectron locomotive from Břeclav, 55 km southeast of Brno. The train carried 1,200 tonnes of wood from the Bohemian-Moravian Highlands, specifically from the Okříšky station. The train travelled 600 km through Austria and Germany, arriving at the destination within 12 hours.

The Czech operator says this is the beginning of a new phase in the expansion business strategy. A number of other business cases are under negotiation for the provisioning of new transport services to other destinations.

The ČD Cargo locomotives are expected to operate more trains in Germany.

On March 5, ČD Cargo, a.s., Niederlassung Deutschland was registered as a new operator’s branch in Germany. This is another step for the expansion into the foreign markets. It was preceded by the issuance of the B certificate by the German Rail Authority EBA with effect from 1 March 2020. This makes ČD Cargo a fully-fledged carrier on the German railway network.

In 2018, ČD Cargo has signed a contract to purchase of 4 Vectron locomotives to complement the existing 8 Vectron locomotives. The aim of the locomotive procurement, which also includes 10 Bombardier Traxx MS3 locomotives, is to provide transport services in other European countries.

The operator has announced its plans to renew the fleet by acquiring 55 new locomotives, of which 50 multi-system electric locomotives and 5 diesel locomotives.

This is part of its strategy to reduce the travel time and increase the capacity and reliability to provide effective transport services across other European railway networks such as Poland, Slovakia, Hungary.