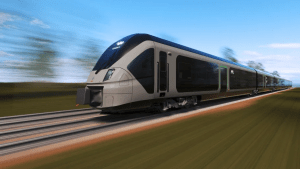 Sweden’s rail operator SJ awarded CAF a contract for the supply of 25 regional electric trains which will enter passenger service on the Stockholm-Mälardalen railway network. SEK 3 billion (EUR 300 million) is the value of the contract which is part of SJ’s SEK 12 billion (EUR 1.2 billion) commitment to modernise and extend its rolling stock fleet. The contract is the largest train procurement project in SJ’s history.

The new EMUs are expected to be put into service in 2025 and will replace the existing trains.

The three-car trains will provide additional capacity and will have about 1000 seats. The design and function of the trains is based on several customer surveys, both SJ’s own but also surveys conducted by commuter associations and other passenger groups.The involvement of SJ’s staff has also been important in the development of the requirements for the new trains.

“We are acquiring these new trains to meet the increased demand not least in the Stockholm-Mälaren region. Although the trains will have plenty of seats, we have set the bar high in terms of comfort. The trains will be adapted for people travelling for one or two hours, but also for those who travel longer. A more flexible way of working means that many people can consider commuting a little longer than before, being at work 1-3 days a week and at the same time take benefiting from train’s great advantage, that it is possible to use travel time for work, recreation or rest,” SJ’s business manager Jan Kyrk said.

SJ says that together with the transport authority Mälardalstrafi’s investment in regional services, the company will “contribute to a cohesive transport system and sustainable development in a growing in the region, by providing a comprehensive network of regional train connections with frequent services using modern trains.”

The procurement will meet increased transport demand which in the last two decades has more than doubled. 2019 was a record year in terms of train travel in the country. The corona pandemic has reduced the traffic, but SJ sees it as a temporary decline in demand and is now preparing to meet an increasing number of train passengers by buying the new regional electric trains.

The new trains are part of company’s commitment to deliver comfortable and modern services and at the same time to offer more and more people the opportunity to choose the train as an important prerequisite for Sweden to be able to achieve its climate goals.

The rail companies in Sweden are investing for the modernisation of the rolling stock. In August, Stadler signed a contract with AB Transitio and Tåg i Bergslagen to deliver seven 4-car Dosto trains. In 2020, the Swiss manufacturer signed a contract for the supply of 12 Mälartåg trains.