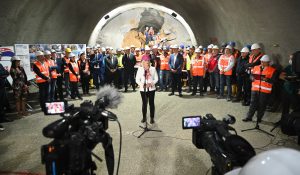 The Minister of Transport, Zorana Mihajlovic, the President of the Provincial Government Igor Mirovic and the Director of the RZD International for Serbia, Mansurbek Sultanov, attended the breaking of the left pipe of tunnel which now is 91% completed.

“This is an example of a good construction site and the business of the world’s best companies, and I am proud that our companies work together with them and that our workers can learn and gain experience for new projects. In the fall of next year, we will travel from Belgrade to Novi Sad in 30 minutes,” Zorana Mihajlovic said.

The facility consists of two parallel single-track tunnels with a total length of 2.2 km. Currently, the team has completed tunneling in the left bore from the northern and southern entrances.

The right bore was dug through in early April. Also, more than 1.3 km of permanent lining of the tunnel have been completed, anti-landslide protective structures have been equipped, and one of two transverse service walkways has been excavated.

“We have not had such a large investment in Serbia for decades. This project is important for the whole country and especially for Vojvodina. We are working every day and the works will be completed within the planned deadline,” Igor Mirovic said.

In total, during construction, it will be necessary to excavate more than 300,000 m3 of soil and lay more than 170,000 m3 of concrete using almost 12,000 t of reinforcement and steel metal structures.

On the Belgrade–Budapest railway line, where RZD International is performing rehabilitation and modernisation works, two unique structures are being constructed. The tunnel and the viaduct in Čortanovci constitute a unified complex of railway structures that will ensure the speed of trains up to 200 km/h.

RZD International is reconstructing and building the Stara Pazova–Novi Sad double-track railway line. As part of the project, the track’s upper structure is being built and 28 artificial structures are under construction, including the new Beshka station and the Karlovački Vinogradi roadside station, and the Injia, Sremski Karlovci, and Petrovoradin stations which are being reconstructed.