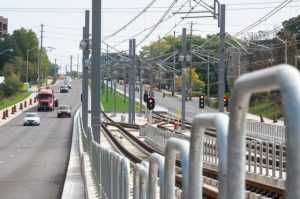 The last section of track of the Eglinton Crosstown LRT has been laid on November 1, when Crosslinx Transit Solutions constructor fastened the final clip, reaching a 100 per cent rail installation for the new transit line in Toronto.

To mark the achievement, the clip was special gold-painted and was installed at Eglinton Station, located at the intersection of Yonge Street and Eglinton Avenue. With that last clip, all of the tracks along the LRT are now in place between Mount Dennis Station in the west and Kennedy Station in the east.

Within the next period, the light rail vehicles will test the infrastructure across the entire line.

Installation of the overhead catenary system, train signals, communications systems, and other features to enable safe train movement will continue into 2022.

The new light rail line is expected to be completed in 2022 providing up to 60% faster transport services than current travel times.

The new line will be extended towards west, forming the co-called Eglinton Crosstown West Extension (ECWE) for which this year a USD 605 million contract was awarded for the construction of its tunnels. The line will be up to 13.9 km-long with more than 10 stations providing a continuous rapid transit line into Mississauga. 4.7 km of the line would provide transport connection to the Pearson Airport in Toronto. The ECWE will travel underground from Mount Dennis Station onto an elevated guideway between Jane Street and Scarlett Road, then continuing underground to Renforth Drive.