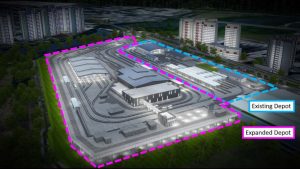 Sato Kogyo awarded Aurecon a design and construction contract for Sengkang-Punggol LRT (SPLRT) depot. Prior to the appointment, Aurecon had worked closely with Sato Kogyo to put forth an innovative design proposal that optimises the depot’s layout. In its consultant role, Aurecon will provide architectural, civil, structural, building services and other design services required for the construction of the SPLRT depot expansion.

Sited above the North East Line’s depot in Sengkang, the 3.5-hectare depot will be expanded to 11.1 hectares as part of efforts to increase its stabling capacity to accommodate 17 new two-car trains and create additional space for maintenance facilities.

To ensure that the project will be carried out efficiently, effectively and safely without disruption to daily operations, Aurecon will adopt a user-centric approach from conceptualisation to design and construction. This includes tailoring the design construction sequence and methodology to accommodate the requirements of an operational rail network, as well as to deliver an expansion that seamlessly complements the existing North East Line depot technically and aesthetically.

Upon completion in 2027, the expanded depot will consist of two new reception tracks to shorten the train launching time and three new traction power substations to support the operations of the fleet’s two-car trains.

The expansion of the depot will boost the availability of trains and improve overall rail reliability to better serve the growing transport needs of residents in the area.

In February, Singapore’s Land Transport Authority (LTA) has awarded two separate contracts for the procurement of new trains for Sengkang-Punggol LRT and the expansion of its depot facilities. A SGD 439 million (USD 316.76 million) contract was awarded to Mitsubishi for the supply of 17 two-car light rail vehicles along with the provision of signalling system, guideway system and depot equipment for the expanded depot.