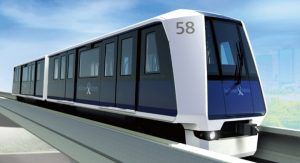 Land Transport Authority (LTA) of Singapore has awarded two separate contracts for the procurement of new trains for Sengkang-Punggol LRT (SPLRT) and the expansion of its depot facilities. USD 443.17 million (SGD 596 million) is the combined value of the contracts.

The consortium comprising Mitsubishi Corporation, Mitsubishi Heavy Industries Engineering and Mitsubishi Heavy Industries Asia Pacific won a USD 326.4 million (SGD 439 million) contract for the supply of 17 new two-car trains for the light rail line. The contract also includes the provision of signalling system, guideway system and depot equipment for the expanded depot. The trains are scheduled to be delivered from 2024 to 2027.

The LRT is currently operated by 16 two-car trains and 25 one-car trains. The new trains will progressively replace the existing one-car trains, increasing passenger capacity on the SPLRT network to better serve residents and meet long-term public transport demand in Sengkang and Punggol towns.

The contract on the design and construction of the depot facilities a USD 116.7 million (SGD 157 million) contract was awarded to Sato Kogyo. To increase its stabling capacity and create more space for maintenance facilities, the 3.5-hectare SPLRT depot will be expanded to 11.1 hectares. Situated above the North East Line’s depot in Sengkang, the expanded depot will also include two new reception tracks to shorten train launching time, and three new traction power substations to support the operations of the two-car trains.

The depot expansion works for Sengkang-Punggol LRT will commence in the first quarter of this year and are expected to complete by 2027.

Sato Kogyo, a Tokyo-based company was involved in the construction of Upper Thomson station on the Thomson-East Coast Line as well as Bencoolen, Mattar and Bedok North stations on the Downtown Line.