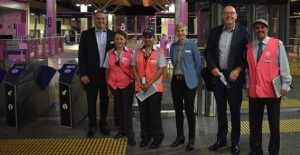 Auckland One Rail (AOR) is the new rail operator of Auckland rail passenger system under a partnership signed with Auckland Transport (AT) on 17 January 2022. AOR is a joint venture comprising ComfortDelGro Transit and UGL Rail in a 50:50 equity relationship.

AOR will be responsible for train operations, the maintenance of electric train fleet as well as for station operations and maintenance, safety, and security.

The contract, valued at around NZD 130 million (USD 89.16 million) per year and NZD 1.2 billion (USD 823 million) over an eight – year period, was the result of an international tender for the city’s rail services.

Under the agreement, AOR will open a new train maintenance facility in South Auckland for train overhauls which will also play an important role in engineering apprenticeships.

“With one organisation now responsible for the day-to-day operation of our passenger rail network we’ll see better accountability and responsiveness on the issues which matter most to passengers,” the Chief Executive of Auckland Transport Shane Ellison said.

The new contract will enable better integration in all aspects of operations, including the NZD 7 billion (USD 4.8 billion) of rail investment for the City Rail Link, electrification of the rail line between Papakura and Pukekohe, and the purchase of additional electric trains over the next few years.

The contract award is part of AT’s ongoing focus to continue the rapid growth in Aucklanders using the region’s rail services, which has grown from just over two million passenger boardings per year in 2000, to more than 22 million by 2020, a 10-fold increase.

At the beginning of 2020, AT launched the process for the new rail franchise and in August 2021, the authority announced AOR the winner of the tender.