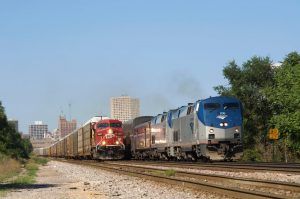 Amtrak and Canadian Pacific Railway signed an agreement to support the proposed combination of CP and KCS (Kansas City Southern) railways and the expansion of Amtrak services in the Midwest and the South.

“CP has been an excellent host of Amtrak intercity passenger service year after year and has established itself as a leader in the rail industry,” Stephen J. Gardner, Amtrak President said.

The two signatories will work together to increase both passenger and freight transport services across the country. Under the agreement, Canadian Pacific Railway will support Amtrak’s infrastructure projects “to provide additional capacity needed to accommodate additional services,” Keith Creel, the President of CP said.

CP has committed to maintaining its industry role as a host rail and to cooperating with Amtrak to implement its long-term strategic vision to bring new and expanded intercity passenger rail service to more North American communities. The projects include increased frequency on the Hiawatha Service between Chicago and Milwaukee, extending Hiawatha Service from Milwaukee to St. Paul, Minn., to create a second round-trip on the Twin Cities-Milwaukee-Chicago corridor. The companies will also cooperate to bring passenger service through the Detroit River Tunnel between Michigan and Ontario to Windsor and Toronto, with connections to VIA Rail Canada.

The agreement also includes to support Amtrak efforts to work with the Southern Rail Commission (SRC) and others for the first service in more than 50 years on two U.S. routes. This covers the establishment of Amtrak service between New Orleans and Baton Rouge, La and the elaboration of a study relating to the potential for of service between Meridian, Mississippi, and Dallas.

“We appreciate Amtrak’s efforts to provide additional intercity passenger rail service that will benefit the people and economies of both Minnesota and Wisconsin. Once complete, the second daily round trip between Saint Paul and Chicago is expected to improve existing infrastructure and provide increased choice for residents traveling between some of our major cities – with stops in towns and cities of all sizes along the way,” said the Commissioner of Minnesota Department of Transport Margaret Anderson Kelliher.

The two companies will file their agreement as part of the docket in the combination of CP and KCS proceeding at the STB. In September, CP and Kansas City Southern signed the merger agreement expected to be completed this year.