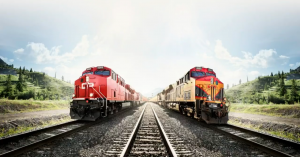 On September 15, the CP-KCS combination agreement was signed after Canadian Pacific’s offer was declared superior to Canadian National’s proposal.

The Canadian Pacific Railway (CP) and Kansas City Southern (KCS) have entered into a merger agreement, under which CP has agreed to acquire KCS in a stock and cash transaction representing an enterprise value of approximately USD 31 billion. This includes the assumption of USD 3.8 billion of outstanding KCS debt. The companies expect the transaction to close and KCS shareholders to receive their consideration in Q1 2022. CP’s proposed control of KCS is expected to be completed in the second half of 2022

The transaction, which has the unanimous support of both boards of directors, values KCS at USD 300 per share, representing a 34 per cent premium, based on the CP closing price on August 9, 2021, the date prior to which CP submitted a revised offer to acquire KCS, and KCS’ unaffected closing price on March 19, 2021.

The new single-line hauls across a combined network provides important connections for the automotive manufacturing and distribution centers from the three countries, for the energy, chemical, and merchandise shippers to reach new markets and global consumers. The rail links allow the efficient flow of agricultural products from CP’s origin-rich franchise to KCS’ destination-rich franchise, generating new optionality for shippers and receivers.

The customers would not experience a reduction in independent rail choices as a result of the transaction. CP-KCS have committed to keep all existing freight rail gateways open on commercially reasonable terms, while simultaneously competing aggressively to attract traffic via new single-line north-south lanes between Canada, the Upper Midwest and the Gulf Coast, Texas, and Mexico.

The new single-line routes made possible by the transaction are expected to shift trucks off crowded U.S. highways, lowering emissions and reducing the need for public investments in road and highway bridge repairs. The synergies created by the merger are expected to take tens of thousands of trucks off the highways annually.

While remaining the smallest of six U.S. Class 1 rail operator, by revenue, the combined company would have a much larger and more competitive network, operating 32,186 km (20,000 miles) of rail, employing close to 20,000 people, and generating total revenues of USD 8.7 billion based on 2020 actual revenues. The CP-KCS combination is expected to create jobs across the joined network. Additionally, the companies expect efficiency and service improvements to achieve environmental benefits.

“The CP-KCS combination will not only benefit customers, labor partners, and shareholders through new, single-line transportation services, attractive synergies and complementary routes, it will also benefit KCS and our employees by enabling us to become part of a growing and truly North American continental enterprise,” KCS President Patrick Ottensmeyer said.

A CP-KCS combination would preserve the six-rail structure of the North American Class 1 rail network, with two in the west, two in the east and two in Canada, each with access to the U.S. Gulf Coast. The two companies once combined would remain the smallest of the Class 1 carriers.