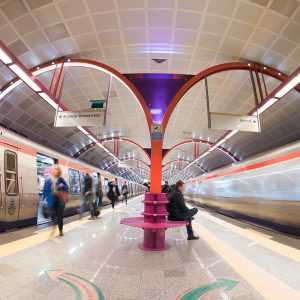 Alstom won two signalling contracts in Turkey for the digitalisation of the rail sector, which will facilitate the border crossings and increase reliability and commercial speeds.

The company will support Turkey’s General Directorate of Infrastructure Investments (AYGM), and Istanbul Metropolitan Municipality’s in their efforts to upgrade their signalling infrastructure in the country.

The scope of AYGM includes the construction and supply of electromechanical works for the Bandirma– Bursa– Yenisehir– Osmaneli (BBYO) high standard railway project which is nearly 201 km-long.

Through Kalyon Insaat Sanayi ve Ticaret, Alstom will supply Interflo 250 and 450, ERTMS level 1 and 2, and deploy the entire Interlocking system including Traffic Control Centre (CTC). Additionally, Alstom will install a smart object controller with the system to eliminate obsolescence risks with legacy systems and provides the capability for the line’s signalling systems to interface over modern fibre-based digital networks and GSMR to increase reliability, performance and functionality. At the end of the project, BBYO line will be fully interoperable to all available trains in the Turkish network.

Under the contract with Istanbul Metropolitan Municipality Alstom will deliver signalling systems for the Cekmekoy – Sancaktepe – Sultanbeyli (CSS) metro line. Through Dogus Insaat ve Tıcaret – Yapı Merkezı Insaat ve San – Ozaltın Insaat Tıcaret ve Sanayı joint venture, Alstom will supply, test and commission the entire signaling system of the 11 km long metro line, including the supply of wayside equipment for 8 stations and on board systems, and the CBTC signalling for 4 new trains. These driverless systems will shorten headways between trains by 90 seconds.

The project on the construction of Cekmekoy – Sancaktepe – Sultanbeyli line is performed into two phases. It is expected that the first section will be completed in 2023 and the second metro section in 2024. The metro line will have a capacity to carry 120.000 passengers per hour.

The digitalisation of the rail transport supports sustainable mobility by adding more capacity to the existing infrastructure while further increasing the comfort and safety of this transport mode.

In Turkey, Alstom has completed the interlocking system on the Eskisehir-Kutahya-Balikesir railway line.