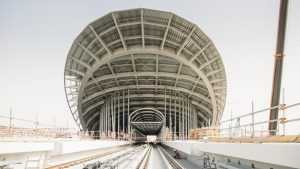 Alstom was awarded a contract to supply, equip and commission the track, the 3rd power rail and the linear equipment for the eastern section and the viaduct of Grand Paris Line 18 part of the future Ile-de-France metro system.

This order is worth EUR 133 million euro for the firm tranche.

Alstom oversees all studies, supply, works and tests for the track, the 3rd rail and the linear equipment for the eastern section and the viaduct of Line 18.

35 kilometres of pedestrian walkways and 50 km of cable trays will be installed in addition to the track and the 3rd rail.

10% of the contract’s volume will be allotted for social integration and will mobilise 250 employees from Alstom’s Infrastructure France teams, both on the Line 18 worksite and at the Alstom site in Saint-Ouen.

“Alstom becomes a major player in the construction of Line 18 of the future Paris metro, with this order and the one for the rolling stock and the automatic control system obtained earlier,” Jean-Baptiste Eyméoud, President of Alstom France said.

In October, Alstom won a EUR 230 million contract for the supply of 37 driverless metro trains to operate the Line 18, which will be based on Metropolis platform that will be delivered for the other three lines of the new metro system of Paris. Under the contract, the French company will also deliver solutions for driverless automated systems and other solutions for this new metro line.

Grand Paris Line 18 is an automatic metro line that will eventually link Versailles to Orly airport in 30 minutes, passing through the Saclay plateau, its education and research centres. The section between Massy-Palaiseau and the CEA/Saint-Aubin station is scheduled to enter service in 2026 and the section between Orly airport and Massy-Palaiseau is scheduled for 2027.