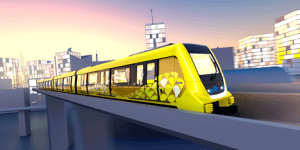 With a value of EUR 720 million, the contract for the city’s fully automated (Grade of Automation 4) metro line marks the recent consortium’s second turnkey metro project in Taiwan after the Wanda-Zhonghe-Shulin Line.

Under the contract with its share at over EUR 430 million, Alstom will also renew the signalling system for Phase One of the Circular Line. The central section of the line covers 14 stations and one depot over 15.4 km, which has been in operation since January 2020.

CTCI will lead for the track work, power supply, depot equipment, telecommunication and ticketing systems. The project involves overhauling the existing CBTC signalling system during the limited engineering hours, to minimise the impact on passenger service.

The project management and system integration will be managed locally with the support of Alstom’s Turnkey engineering centre.

The contract “cements our position as the sole signalling supplier for the entire Taipei metro network. Overall, this is an example of how the Asia-Pacific market remains dynamic and we aim to maintain our market leadership across most segments”, Ling Fang, the President of Alstom in Asia Pacific said.

In July 2020, the consortium has been awarded a EUR 424 million contract to deliver integrated metro system for Taipei Metro Line 7 extension.