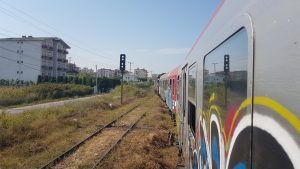 The rehabilitation project of the Vorë – Han i Hotit rail line which ensures the connection with Montenegro has been endorsed for 2022 Western Balkans Investment Framework (WBIF), part of European Commission Economic and Investment Plan, the director at the Permanent Secretariat of the Transport Community Matej Zakonjšek announced.

The EUR 267 million project covers the rehabilitation of 120 km rail line and 12 stations including the installation of new signalling systems and safety improvements. Currently, the maximum

operating train speed is about 40 km/h, while in some sections, it is lower than 20 km/h while the signalling system is damaged and almost inexistent on large portion of the line.

The project has received a EUR 133.4 million WBIF grant, with EUR 4.5 million previous EU grants, while the European Bank for Reconstruction and Development (EBRD) and the European Investment Bank (EIB) are contributing with a total investment of EUR 125.8 million with EUR 62.9 million loan each. Albania covers the project’s funding with a EUR 3.3 million is the national contribution.

The project builds on previous WBIF TA (Technical Assistance) with a WBIF grant approved in December 2016 for the preparation of the detailed design and tender documents for the rehabilitation works. It complements other WBIF projects which includes the rehabilitation of Tirana – Durrës and Durrës – Pogradec – Lin railway lines and the construction of Lin – Border with North Macedonia Line on Corridor VIII.

The project has a significant cross-border and therefore regional impact as is ensuring domestic rail transport connecting Albania’s national network to the regional and European railway networks through Corridor X.

In 2017, the transport ministers of Albania and Montenegro inaugurated the Tuzi joint railway station.

Regarding the investments on the border line, Montenegro has prepared an application for the preparation of the main reconstruction, electrification and modernisation of the entire Podgorica – state border with Albania rail line with a length of 24.7 km.

The consortium Suez ‐ IPF6 is preparing the detailed design and the Environmental Impact Assessment study for the rehabilitation of the Vorë – Han i Hotit rail line. The design provides also for the future rail links to the Shengjin Port and Kosovo. The connection to Shengjin is planned at Lezhe 2 station, while Kosovo link at Mjede station.

The line is part of the indicative extension of the TEN‐T Core Network in the Western Balkans, which will link Albania to the regional and European railway networks through the pan European Corridor X. The line forms the Rail Route 2 Podgorica (Montenegro) – Vorë (Albania) with a total length of 144 km which links the capitals of Tirana and Podgorica and extended to the port of Durres is a key project for the region.