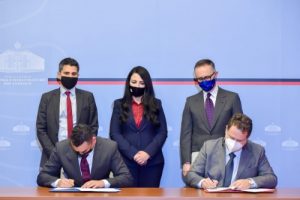 The Director General of Albanian Railways (HSH) Ani Dyrmishi and the representative of the Italian company INC have signed the contract for the rehabilitation of Tirana – Durres rail line.

Under the contract more than 34 km of the existing railway track between the capital Tirana and the port of Durres will be rehabilitated. The project also covers the construction of a new 7.4 km-long track connecting Tirana city to the Tirana International Airport (Rinas).

The rehabilitation will allow for safer and faster travel compared to the current average of less than 60 km per hour. The travel times will be significantly shorter, taking 22 minutes from Tirana to the Durres port, and only 12 minutes to Rinas airport.

The civil works, supervision and project management is expected to be completed within 30 months. Recently, HSH has signed the consulting contract for the project.

The rehabilitation project is Albania’s most important step to transform its rail transport system and benefit the European support with an investment grant of EUR 35.5 million under its Connectivity Agenda for the Western Balkans and by the European Bank for Reconstruction and Development with a EUR 36.9 million loan. In addition, EUR 2.75 million in grants from bilateral donors have been secured through the Western Balkans Investment Framework.

“This is one of the priority projects for boosting the economy and connectivity of Albania. It is identified as such in our national strategic documents as well as in the EU’s Connectivity Agenda. The project will be implemented in line with the EU environmental standards and will significantly contribute to the creation of new jobs,” Belinda Balluku, the Albanian Minister of Infrastructure and Energy, said.

The Tirana – Durres rail line is the busiest section of the Albanian railway network and is an extension of the Mediterranean Corridor, a part of the Trans-European Transport Network (TEN-T). The line accommodates both passenger and freight traffic. It currently operates with five stations, at Durres (the terminal station), Shkozet, Sukth, Vore and Kashar. The former Tirana terminal station at the centre of the city has been demolished, and a new terminal (new Tirana Public Transport Terminal), is to be integrated with the existing line.