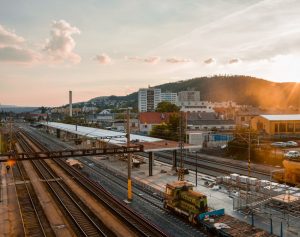 The rail infrastructure manager of the Czech Republic SZ has completed the ETCS installation on the 50 km Prague-Uhříněves – Votice railway connection, part of the IV rail transit corridor.

The construction works, performed by AŽD Praha started in November 2019 and were completed in May 2021.

Part IV rail transit corridor between Prague’s Uhříněvsí and Votice underwent gradual modernisation between 2005 and 2013. The signalling system ensures a smooth operation of the domestic and international rail traffic. At the same time, the ETCS installation increases the safety of train traffic.

They included the installation of balises on the tracks and also the construction of a radio block centre (RBC). At the same time, modifications were made to the existing station and line security equipment, which will ensure the transmission of data on the condition of roads, crossings and other information to the RBC.

SZ is currently working to install the ETCS on the Votice – Sudoměřice u Tábora and Doubí u Tábora – Soběslav rail sections and the last construction covers the section between Ševětín and Nemanice. The project allows the entire railway line from Prague via České Budějovice and Horní Dvořiště on the state border with Austria to run in ETCS system which is integrated into the European rail network.

CZK 211.27 million (EUR 8.3 million) is the total investment cost of the project which is co-financed by the European Union from the Cohesion Fund under the Operational Program Transport 2014-2020. The EU support rate is 85% of the eligible costs and the amount of the subsidy is a maximum of CZK 162.5 million (EUR 6.4 million). The national funding is provided by the State Fund for Transport Infrastructure.