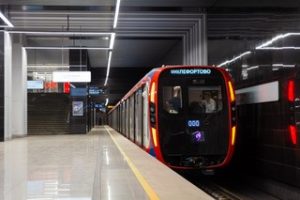 Moscow has launched two new Moskva-2020 metro trains and by the end of the year, the Moscow Metro is expecting to put into commercial operation 28 additional new trains.

“By the end of the year, we will launch 28 more such trains on Moscow Metro. The fleet of cars on Line 5 (Circle Line) will be completely updated. We plan that in the future, passengers of the Big Circle Line (Line 11) will ride the Moskva-2020, which is the most modern and silent trains equipped with air decontamination system, extended doors and gangways,” Deputy Mayor of Moscow Maxim Liksutov, said.

Currently, the Russian capital owns a fleet of 61 Moskva-2020 trains manufactured by Transmashholding in the Moscow Region.

The new vehicles will replace the existing old train fleet. Since 2010, Moscow Metro reduced its average age of train fleet from 22.5 years to 15 years today.

In October 2020, the Moscow Mayor Sergey Sobyanin has inaugurated the new generation of trains the first vehicles being put into passenger service on the Circle Line.

Last year, the municipality announced that will acquire 1,300 Moskva-2020 metro cars for the Circle, Big Circle and Kaluzhsko-Rizhskaya lines.

The new features of the metro trains include a 15 per cent increased door width from 140 cm to 160 cm that is essential for the traffic flow, as well as a 57 per cent increase of the inter-car gangway from 102 cm to 160 cm. They are equipped with an up-to-date information system, including larger above-door LCD displays with metro line diagrams, new overhead console-mounted data displays, a system of wall-mounted LCD displays and bigger touchscreens for plotting routes as well as a wall-mounted route-indicating screens outside the train.