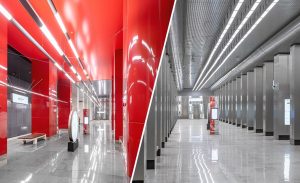 Moscow Metro has opened two new stations on the Big Circle Line which will reduce the peak hour headway from 2.45 min to 2.30 min on the section between Savyolovskaya and Khoroshyovskaya stations.

The trains are expected to be less crowded since passengers will have 2.6 thousand new seats.

Narodnoe Opolchenie and Mnyovniki are the two new stations which will improve transport connections for 174 thousand residents and 113 thousand people now have high–speed transport within walking distance. “These are the first Metro stations in the Khoroshyovo-Mnyovniki district. Thanks to convenient and fast transfer to other lines, residents can choose new routes and, most importantly, save their time. We expect that the nearby roads will become less congested as well,” Deputy Mayor for Transport Maxim Liksutov said.

It is expected that 5,500 passengers will shift from personal and motor vehicles to the metro services provided by the line, particularly through the opening of these two new stations.

At the beginning of 2021, Moscow authorities announced that by the end of this year, 11 new stations will be put into commercial operation on the Big Circle Line. In 2020, seven stations were opened along the line.

The Big Circle Line was opened in 2018 and in the first two years of operation, 58 million trips were made. The line is expected to be completed in 2022 when 3.3 million of Moscow’s inhabitants will benefit metro access within walking distance. They will be able to save 30 minutes along the route, compared to road transport while the other metro lines will be 10–30 per cent less crowded.

The 70-kilometre–long Big Circle Line will comprise 31 stations. The entire project is divided into five sections and excavation of 94 per cent of the line tunnels are completed. In February 2021, overall circle construction readiness was 74 percent.