The global market volume for railway electrification is EUR 9.6 billion and is expected to grow at a CAGR of 0.7% per year until 2025, according to a report of SCI Verkehr.

Despite the COVID-19 pandemic and its negative consequences on public funds for investments, the market maintains a high volume. The decreased investment budget will especially impact new construction of railway lines, but many states are continuing their decarbonisation strategies by electrifying current diesel railway lines with growing operational demand which will lead to a high market volume in the coming five years.

This reflects the trend towards e-mobility and the gradual shift away from diesel propulsion in rail transport as well.

Of about 1.3 million km of track worldwide, about 375,000 km are electrified, bringing the total volume to just under 30%. In the individual market regions, the degree of electrification varies between 1% in North America and 57% in the Western Europe. The degree of electrification in Asia has risen sharply in recent years. In 2013 it was 34%, four years later 47% and in 2020 already 55%. In addition to the high investments in both the new construction of railway lines and the electrification of non-electrified lines, India has also been a growth driver alongside China. In contrast, the development of the electrification level in European countries is very slow. 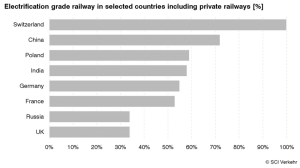 Different electricity systems have developed in the individual countries and regions over the course of history. Their concrete structural design is even more differentiated than the consideration of the electricity systems used would indicate. In the areas of railway electrification, this has led to the formation of medium-sized national markets with many regional suppliers, each of which is familiar with the national regulations and standards. This industrial structure favours niche suppliers.

Siemens and Alstom are among the few international suppliers in the railway electrification sector. The Chinese state-owned companies CREC and CRRC dominate through high shares in the large Chinese market as well as increasing foreign orders in the regions of Africa, South America as well as in other Asian countries.

The European Union wants to achieve net zero greenhouse gas emissions by 2050. In December 2020, the EU member states agreed to amend their climate goals for 2030 to increasing their goal to emit less than 40% emissions compared to 1990 to at least less than 55%.